Thursday March 10, 2022 - 8:15PM
(0-3) Portland Samurais at (0-3) Vancouver Bears
Line: EVEN
O/U: 42
Win Pct: POR 50.2%
Both Portland and Vancouver suffered tough losses, by giving up a touchdown within the last 30 seconds of their respective home games in week 3. The good news for each team entering week 4, is that someone has to come away with a win. Well… unless they tie, which wouldn’t be too out of the ordinary for the way these teams have played this year. This looks to be a pretty even matchup, so who wants to win more? Or, lose less?

Sunday March 13, 2022 - 1:00PM
(2-1) Arizona Eagles at (1-2) Atlanta Flying Fleet
Line: EVEN
O/U: 40.5
Win Pct: ATL 50.3%
The Eagles defense rebounded strong in week 3 against the Icons, after giving up over 50 points in week 2. Atlanta would like to do the same thing in week 4, after getting pummeled by the Bobcats in a 40 point loss, which could have been worse without a Flying Fleet touchdown as time expired. With the Eagles making the cross country trip, playing a 1:00 game, maybe that gives Atlanta a slight edge in an otherwise evenly matched game.

Sunday March 13, 2022 - 1:00PM
(1-2) Baltimore Bluebirds at (1-2) New York CityHawks
Line: NY -3.5
O/U: 49
Win Pct: NY 59.5%
Baltimore is coming off their first win of the season, defeating Miami on a last second (or, last 2 seconds) touchdown to upset the Sol. The Bluebirds looked pretty good on Sunday, and kept coming back when they found themselves down in the game. That was a good sign, but the defense still needs some work. The CityHawks seemed to always be playing catch-up in the second half of last week’s game. They didn’t have a problem scoring, but they could not stop the Reapers offense. A final try at a comeback fell short within the last two minutes, and now New York is looking at a losing record, and two games back in the division. Either team here would benefit greatly from a divisional win in this one, with either Washington or Boston moving to 4-0 after their matchup this week.

Sunday March 13, 2022 - 1:00PM
(2-1) Carolina Reapers at (1-2) San Antonio Texans
Line: EVEN
O/U: 49
Win Pct: CAR 50.7%
The Reapers are proving that they don’t need defense to win games this season, as long as they score last. Carolina has put up at least 37 points in all of their games this season, and this could be a really good team, if their defense could just make a couple stops here and there. The Texans were able to pull out their first win of the season last week. They benefited from a week of practice with the new look offense with McDonnald taking over at QB for the time being. With another week gone by, and playing a bad defense, maybe the Texans can pick up some momentum. Expect this to be another game that has a lot of points.

Sunday March 13, 2022 - 1:00PM
(1-2) Cincinnati Knights at (0-3) Wisconsin Stags
Line: CIN -3
O/U: 47
Win Pct: CIN 57.6%
It took overtime for the Knights to get win number one for 2022. This team has not played up to its potential thus far, but there’s a lot of season left. A win this week would help them get things in the right direction. Wisconsin at 0-3 benefits from playing in a division that hasn’t shown a clear strong frontrunner yet. A win this week is a must though, because an 0-4 start is going to be really hard to come back from, putting them way behind in the wild card race, leaving a division title as the only path to a playoff berth.

Sunday March 13, 2022 - 1:00PM
(2-1) Dallas Regulators at (1-2) Miami Sol
Line: MIA -6
O/U: 46
Win Pct: MIA 66.4%
The Regulators’ defense is really starting to come together. They suffocated the Seattle offense through most of the game, then when needed most, the offense ran out the final 4 minutes of the clock, denying the Sockeyes an opportunity to comeback. All around, this Dallas team is showing some good signs. Miami has shown flashes during the season, but they are going to give all their fans heart attacks. Every one of Miami’s games has come down to a game winning drive late in the game, and the Sol have been on the losing side more often than not. As 6 point favorites, the Sol need to act like it this week.

Sunday March 13, 2022 - 1:00PM
(3-0) Louisville Lightning at (2-1) Chicago Maroons
Line: LSV -7
O/U: 53
Win Pct: LSV 66.6%
The Lightning again put another complete game together. They have a really good offense, and the defense is playing well, holding scores to field goals in a lot of cases, which, with the offense they have, is a good thing. The Maroons just slipped by the Trappers last week in OT. They play a different, grind it out kind of game, that stopped the Trappers offense in week 3, and it could work again against the Lightning this week. At any rate, Chicago will need to try and keep this thing close.

Sunday March 13, 2022 - 1:00PM
(1-2) Pennsylvania Keystones at (1-2) Birmingham Owls
Line: PEN -3
O/U: 47
Win Pct: PEN 57%
The Keystones have yet to find a true identity on either side of the ball this season, and it’s getting them stuck in games. The Owls lost another heartbreaker, this time losing in overtime. But at least they didn’t have to come from 24 points down in the 4th quarter. There’s a lot of fight in this team, and I’d expect them to yet again be in a close game this week.

Sunday March 13, 2022 - 1:00PM
(2-1) San Diego Breakers at (2-1) Memphis Demons
Line: SD -2
O/U: 52.5
Win Pct: SD 54.3%
The Breakers played a pretty solid game in week 3 in Toronto. At 2-1, they’re sitting in a good spot in a very competitive division, but they have to keep winning, in whatever way they can to keep pace. Playing Memphis means they’re going to need to score a lot of points. The Demons may have taken the Buffaloes a little too lightly in the first half of last week’s game, but they really turned it on in the second half, outsourcing Kansas City 27-0. Second half Memphis looked really good, and they need to play like that all game this week.

Sunday March 13, 2022 - 4:30PM
(1-2) Jacksonville Captains at (3-0) Albuquerque Atoms
Line: JAX -9
O/U: 48.5
Win Pct: JAX 71.5%
The Captains have looked flat two weeks in a row now. A lackluster offense, but an okay defense. They are big favorites this week against the 3-0 Atoms. The difference in record for both of these teams to start the year, is that Jacksonville has not played up to their potential, while Albuquerque has just found ways to win games, and use every bit of their potential, despite not being as talented as some other teams in the league. Even though there’s a big point spread, it would not be surprising if the Atoms keep it close, or pull off the upset.

Sunday March 13, 2022 - 4:30PM
(0-3) Kansas City Buffaloes at (2-1) Salt Lake Trappers
Line: SL -8.5
O/U: 45
Win Pct: SL 71.5%
This game sets up well for Salt Lake to rebound. The Trappers offense should get going again against a poor Kansas City defense, and the Salt Lake defense has a good opportunity to get back on track as well. The Trappers are just the better team, and they need to just go out and win on Sunday.

Sunday March 13, 2022 - 4:30PM
(3-0) Los Angeles Express at (1-2) Colorado Cabras
Line: LA -3
O/U: 52
Win Pct: LA 56.6%
The Express are really starting to look like one of the best teams in the league in the early going of the season. They’ve played three good games. Last week, they saw some adversity, being down 3 early in the 4th quarter, but then they took over the game with a pair of touchdowns to put the game away. They head to Colorado where the Cabras shouldn’t be taken too lightly. Despite losing big last week, the Cabras can be expected to play better at home this week, and they’re hungry for a win.

Sunday March 13, 2022 - 4:30PM
(1-2) Oakland Icons at (1-2) Seattle Sockeyes
Line: OAK -2
O/U: 42.5
Win Pct: OAK 54.4%
This Oakland offense is starting to get concerning. The defense can still play well, but if they can’t score points, it’s going to be tough to win in this league. Oakland will have to keep this game low scoring, and they really need some help on the offensive side of the ball. The good news for the Icons is that Seattle has also been struggling on offense. In a low scoring game, Oakland will have the edge, but this could just be an ugly game to watch.

Sunday March 13, 2022 - 4:30PM
(3-0) Washington Stars at (3-0) Boston Bobcats
Line: BOS -5.5
O/U: 43.5
Win Pct: BOS 64.2%
This is shaping up to be one of the premier games of the weekend. Two 3-0 teams in a big divisional matchup. The winner will advance to 4-0, and get the leg up in the division, in what could be a great two team race in the East. Boston has blown away their expectations coming into the year, and all of their opponents, scoring 38, 44, and 56 points in their three games, winning by no less than 13 points. Washington should be the first big test for Boston’s offense, as this Stars defense has played really well since the second half of their game in week 1. The Stars are just hoping to keep this game in hand, and hold Boston out of the endzone when possible.

Sunday March 13, 2022 - 8:15PM
(3-0) St. Louis Brewers at (2-1) Las Vegas Outlaws
Line: STL -1.5
O/U: 39.5
Win Pct: STL 53.4%
The Brewers have been one of the most dominating teams to start the year, if you’re looking at game scores. They have shut down the offensed of every team they have played this season, and they’re the only defense in the league that has yet to give up a touchdown, which is quite the feat in a league that has seen a lot of scoring this season. Looking closer at the opponents the Brewers have played however, they’re first real test against their defense was against Colorado. With the Outlaws also having one of the league's better defenses, this could be a low scoring game, which plays into both teams’ game plans. The Brewers have the edge on the offensive side of the ball, so it may come down to turnover margin in this one.

Monday March 14, 2022 - 8:15PM
(1-2) Toronto Terror at (1-2) Louisiana Royals
Line: LOU -1
O/U: 45.5
Win Pct: LOU 53.6%
This Monday night matchup is going to loom large for the Terror and Royals. These two teams expected much better out of the early part of their season. Toronto fell to 1-2 with a weak performance against San Diego, and Louisiana got blown out of their own building in an important divisional game against the Lightning. Toronto is in much better shape in their division, despite the record, while Louisiana is almost going into this one thinking about wild card down the road, and this would be a good conference win, plus a good reset for their season.

Good first win for Portland, which shockingly ties them with most wins in their division, until Sunday at least (unless Oakland-Seattle ends in a tie).

Austin Snelick wrote:Good first win for Portland, which shockingly ties them with most wins in their division, until Sunday at least (unless Oakland-Seattle ends in a tie). 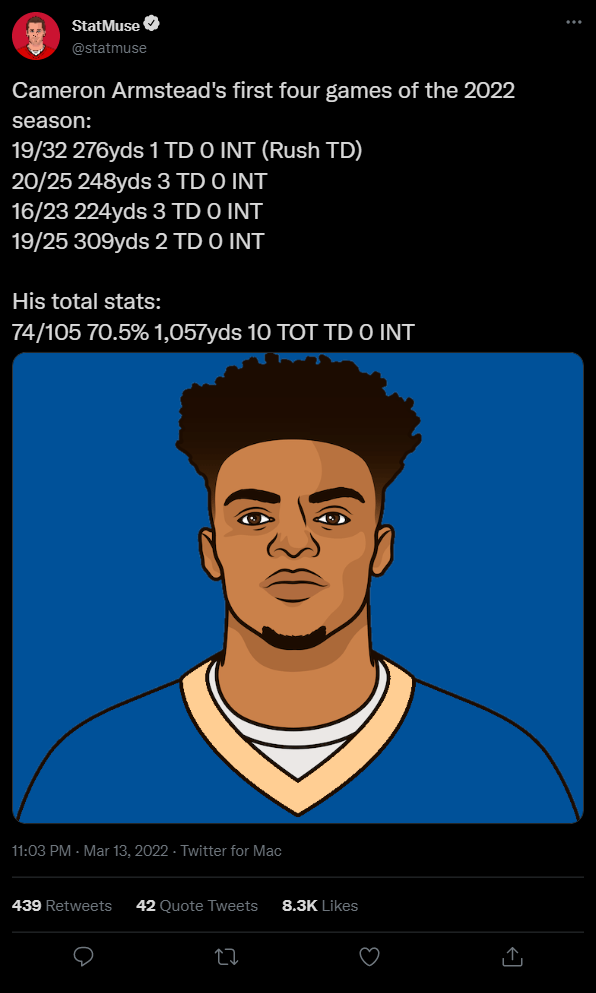