Saturday May 7, 2022 - 1:00PM
(5-5) Carolina Reapers at (4-6) Washington Stars
Line: CAR -5.5
O/U: 46.5
Win Pct: CAR 63.8%
The Atlantic division is starting to get a little too tight for the Reapers, who got off to a great head start earlier in the year. The Reapers have gone 1-4 in their last 5, after a 4-1 start. They really need to start getting back on the right track this week, and they have a winnable game. Washington also needs to start getting things back in gear. at 4-6, their paths to the playoffs are narrowing. This is going to be a big game for each of these teams. Carolina has more riding on this game, but Washington is more desperate.

Saturday May 7, 2022 - 1:00PM
(8-2) Los Angeles Express at (4-6) Chicago Maroons
Line: LA -3.5
O/U: 49
Win Pct: LA 58.7%
All teams have to lose sometimes, and the Express, who were in the game into the 4th quarter, just could not hold off a determined Icons team. The Express are still in control of their division, and the matchup in Chicago this week is a favorable one. Chicago has pulled out two straight wins, but this isn’t some cupcake team they're facing this week. It’s hard for me to see the Maroons pulling off this win, but maybe they’ll play the kind of game they did two weeks ago against the Keystones. That’s the kind of performance it’s going to take to win this one.

Saturday May 7, 2022 - 1:00PM
(7-3) New York CityHawks at (4-6) Jacksonville Captains
Line: NY -3.5
O/U: 47.5
Win Pct: NY 58.7%
The Atlantic division is now in reach for Jacksonville, who has dealt with the injury bug through much of this season. They will face a good test at home this week, in what could be a pivotal game for the Captains in a tough 4 game stretch. Coming off the bye they face a CityHawks team that has the longest active win streak in the GSL, winning their last 6 after a 1-3 start. New York hopes to keep things rolling this week, as they gear up for playoff form.

Saturday May 7, 2022 - 1:00PM
(5-6) Seattle Sockeyes at (2-8 ) San Antonio Texans
Line: SEA -2
O/U: 47.5
Win Pct: 53.8%
Seattle, who once looked like they’d take control of the Pacific division, has since started falling apart, going 1-4 in their last 5 games. If there were ever a team to turn things around against, it would be the Texans, who have absolutely fallen apart with the week 2 departure of their top tier starting QB.

Saturday May 7, 2022 - 1:00PM
(9-1) St. Louis Brewers at (5-5) Memphis Demons
Line: STL -1.5
O/U: 47
Win Pct: STL 54.7%
Things are starting to open up a little more for the Brewers in the Western Conference, with LA’s loss last week. With one less loss than LA, plus no conference losses to LA’s 2, St. Louis is now a game and a half up in the race to the top seed. This Brewers defense has been dominant, and that’s going to be the challenge for the Demons. Teams have recently been able to score more points against the Brewers teams, so the Demons, who have won two straight, including a huge win over the Lightning, may have some momentum here to get the win at home.

Saturday May 7, 2022 - 2:30PM - International Series (London)
(5-5) Salt Lake Trappers at (4-6) Wisconsin Stags
Line: WIS -1
O/U: 48
Win Pct: WIS 54.5%
The Trappers picked up a much needed win last week at home against the Samurais to keep themselves in the thick of things. The Stags, who are very much in the thick of the North division race, having made the climb from an 0-4 start to be in a 4 way tie for first place, need a win to separate themselves in the division. Both teams will meet in London for an international clash between two teams with a lot to play for. Should be a good game for an international crowd.

Saturday May 7, 2022 - 4:30PM
(7-3) Arizona Eagles at (1-9) Vancouver Bears
Line: ARZ -0.5
O/U: 40.5
Win Pct: ARZ 51.7%
After the bad loss to Kansas City, and the bye week, this matchup in Vancouver should be a good reset for the Eagles. Arizona’s defense will have a chance here to put together a good showing, against a Bears offense that hasn’t truly had a great game yet. One thing is for sure though, the Bears typically keep games close, and that’s where this game could become dangerous for Arizona. They need to jump out to a good lead quick.

Saturday May 7, 2022 - 4:30PM
(4-6) Pennsylvania Keystones at (7-3) San Diego Breakers
Line: SD -4
O/U: 49.5
Win Pct: SD 59.0%
San Diego responded to two tough divisional losses with a needed win against the Sockeyes, keeping them in firm possession of a wild card slot. This game against the Keystones will be another game the Breakers will need to win, as the better team in this matchup. The Keystones will not be an easy win though, as they have a lot to play for. PA has also shown that they can go off any given week on offense (as well as lay an egg), so much of the outcome of this game may depend on the performance of the Keystones offense.

Saturday May 7, 2022 - 4:30PM
(4-6) Toronto Terror at (7-3) Las Vegas Outlaws
Line: LV -3
O/U: 42
Win Pct: LV 57.7%
Don’t look now, but the Outlaws have won 5 straight, which is one of the longer active win streaks in the GSL. Have the teams played in this win streak been great? Meh. Have the wins been impressive? Some of them. Vegas hasn’t been an impressive team, but they’ve been getting the wins, and that’s what counts. For Toronto, each win is going to count a little extra, as they find themselves in a division in which every team is currently 4-6. Despite a bad start, they are still in good position to make a playoff run. If this team can get things right, they can be a good team, but they need to show it.

Saturday May 7, 2022 - 8:15PM
(6-4) Dallas Regulators at (4-7) Portland Samurais
Line: POR -1
O/U: 38
Win Pct: POR 54.1%
Dallas continues to keep themselves in good standing in the Western conference, just a step or two ahead of other teams fighting in the wild card race. The primetime matchup against the Samurais is a game the Regulators defense should be able to take over, if they come ready to play. Portland has been playing better as of late, and are looking to get to their bye week on a high note.

Sunday May 8, 2022 - 8:15PM
(6-4) Oakland Icons at (4-6) Albuquerque Atoms
Line: OAK -4.5
O/U: 44.5
Win Pct: OAK 61.6%
What a good win for Oakland this past weekend. They took on one of the best teams in the league and took it to them in the 4th quarter to get W. That’s the kind of win this team needed, and it puts them in a really good position in the Pacific division race. Albuquerque just really needs to find some footing and get a win at some point.

Monday May 9, 2022 - 8:15PM
(6-4) Cincinnati Knights at (5-5) Birmingham Owls
Line: CIN -10
O/U: 49.5
Win Pct: CIN 73.5%
The Knights were the third team to fall to Kansas City’s reign of unimaginable upset terror. Maybe they were looking ahead to the game this week, which 5 or 6 weeks ago, would not have looked so appealing. But now we have two divisional teams battling for a wild card spot, in what’s going to be a huge Monday night clash. Birmingham had their 4 game win streak snapped by the dominant Brewers, but then again, that may just be the best team in the league. If you think the Owls won’t be ready for this game, then you haven’t been paying attention the last couple of weeks. This should be a great game to end week 12. 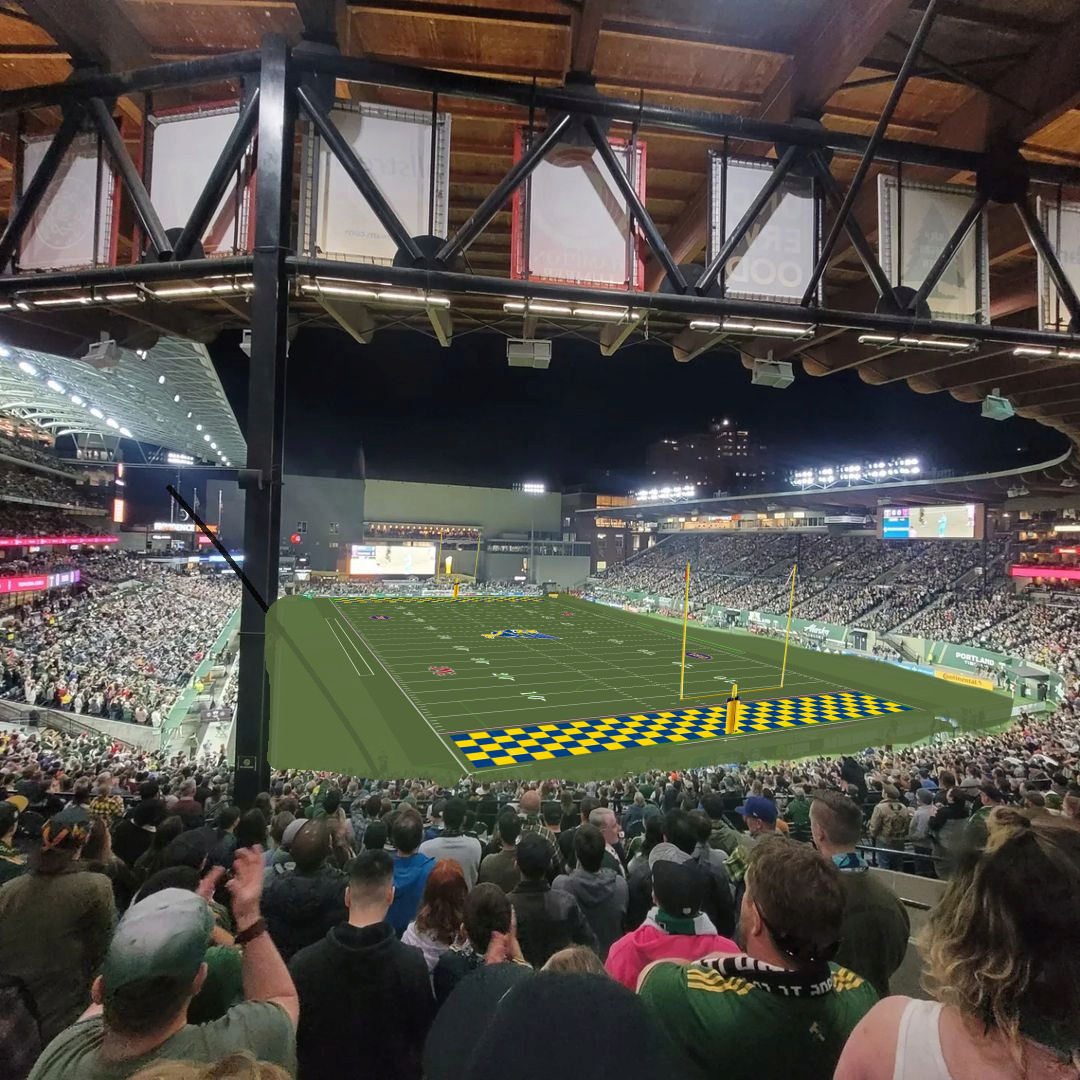 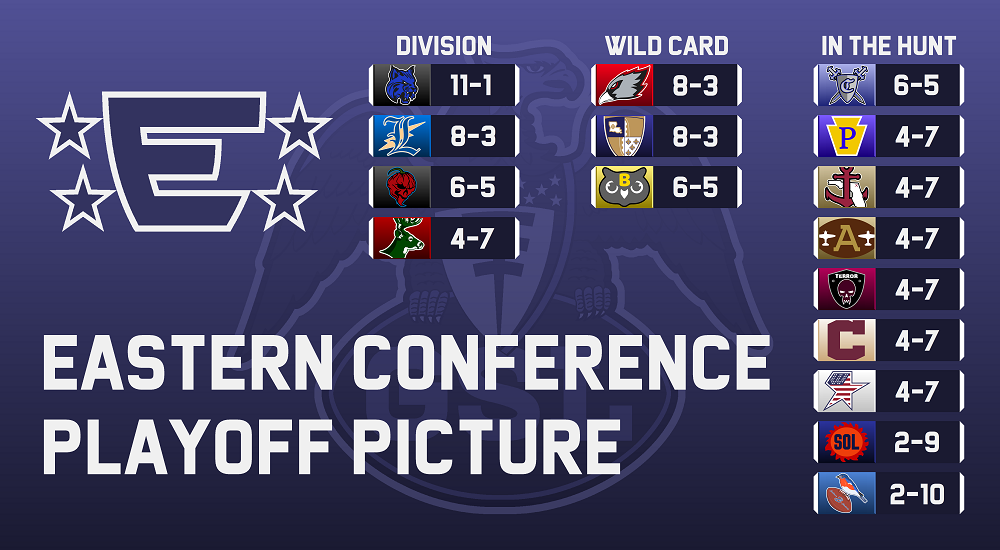 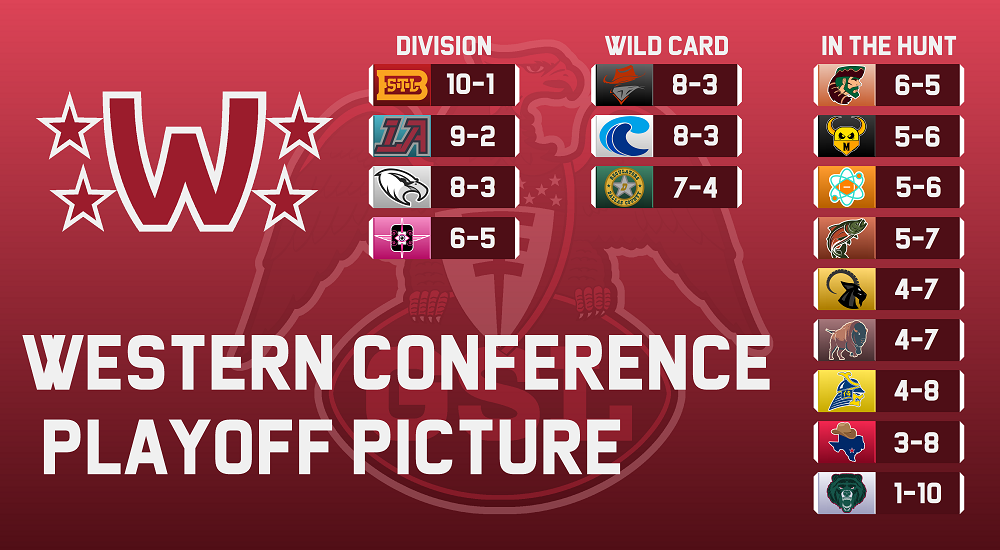 In the East, just about every team is very much alive. The entire North division is 4-7, so who ever sucks the least will walk away with a beating in the Wild Card round.
All the other teams at 4-7 are not too far behind the last Wild Card spot, now held by the Owls at 6-5, after their big divisional win last night.

In the West, the West division is very much open, with three teams at 8-3 or better. St. Louis is in the best position in the league when it comes to finishing off a division, with a 5 and a half game lead over second place.
Even Vancouver is still in this, as they have some shot in in their division, with the Icons leading that division at 6-5.

After next week, all teams will have played 2/3rds of their regular season schedule, and we'll start into the home stretch towards the playoffs.

There are no clinching scenarios after week 12

Vancouver will be eliminated from playoff contention with
1. VAN loss AND DAL win

Washington will be knocked out of East Division title contention with
1. WAS loss

San Antonio will be knocked out of South Division title contention with
1. SA loss AND ARZ win

Colorado will be knocked out of Heartland Division title contention with
1. COL loss AND STL win

Kansas City will be knocked out of Heartland Division title contention with
1. KC loss AND STL win

Thought I ought to maintain some consistency for Birmingham's field with the USFL going on, so I've updated the design to reflect that USFL games are taking place.

Since I overwrote the previous image, a shift+refresh might be necessary to see the updates field design in the image below (should see some USFL logo bleed through).