As with the NFL starting the Super Bowl field the week after the Conference Championships, the grounds crew has already started putting the paint on the field for the Gridiron Bowl. Just the teamboxes are left to be filled in. 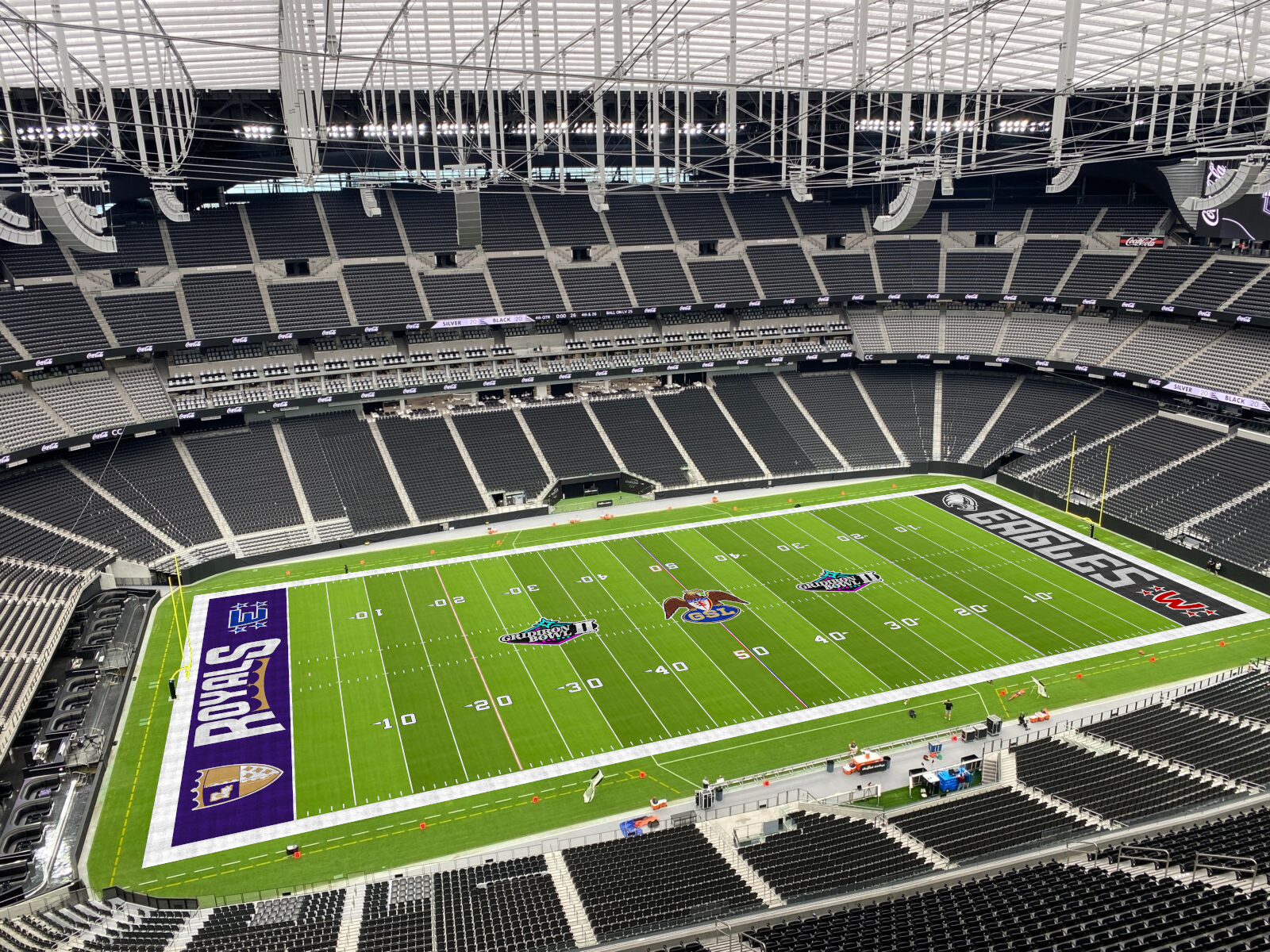 I’m currently unable to do my normal game preview post, but I do have a link for the game preview here:
https://www.gridiron-uniforms.com/GSL/controller/controller.php?action=news-story&story=2022-07-28-1 They’re back! For the second season in a row the Arizona Eagles have fought their way through the Western Conference on their way to the Gridiron Bowl. This was a much tougher season for the Eagles to navigate, as they did not have the offense they had last season, plus they had much stiffer competition in their conference this season. The matchups they had in the playoffs however were advantageous. They matched up well against Dallas and Oakland. The Brewers, however, were the best team in the Western Conference all season long, so it took some championship experience and determination for the Eagles to get past them on the way back to the Gridiron Bowl to defend their title.

The Royals may be a team that’s just plain hard to beat this time of year. They have had one of the most challenging schedules this season, and they are battle tested. They had to fight through one of the best divisions in the GSL this season, which saw three teams make the playoffs, and even had a pesky Birmingham team that won 8 games. Division games like this get you ready for playoff football, and the Royals played great down the stretch to earn the division championship, and have them on a 9 game winning streak. The Eagles might have Gridiron Bowl experience, but the Royals have been in fights against playoff teams all season long.

The Gridiron Bowl matchup can be compared to the Western Conference Championship game in some ways. The Eagles are of course a team with a decent offense, that has really over performed what many expected out of them this season, while their defense has been quite good. The Royals have a great defense, much like the Brewers have had all season. The key difference this game may have is that the Royals offense, especially at the QB position, is better than what the Brewers have put on the field. I think this could be a key factor in the outcome of this game. We have seen the Eagles put points on the board against a great defense, but can their defense keep the Royals from slowly chipping away at their own defense? This game should be a good matchup, and I expect we will have a lower scoring game, with each team still being in it once we get to the fourth quarter.

The betting line for this game puts the Royals has decent favorites, and a game that will score lower than most this season.
Line: LOU -5.5
O/U: 44.5
Win Percentage: LOU 64.4%

Now we can turn our focus to the design elements of the game. The Gridiron Bowl II logo features many elements that instantly make it clear the game is being held in Las Vegas this season. A picture from last week during the painting process shows this season’s field design. There are a few changes to the field design compared to last season’s Inaugural Gridiron Bowl. The GSL logo is at midfield this season, with the Gridiron Bowl II logo at the 30 yard lines. The Endzones feature each team’s primary logo on the left, the conference logo on the right, and the team’s primary wordmark centered. The number font on the field remains the standard block font that Allegiant stadium has used for pro football games since the Raiders moved in.

Here’s a top down rendition of the completed field, with the teamboxes painted. Lastly, we will take a look at the uniform matchup for this year’s game. The Eagles will be the home team for this year’s game. In the Inaugural Gridiron Bowl, the Commanders (now the Reapers) chose to wear white as the home team, which meant the Eagles got to wear their home uniform combo. The Eagles, as the home team this year, will be wearing that same combo, black over white. The Gridiron Bowl II logo patch will sit on the upper left chest for both teams this season. The Royals, as the away team, are going with their white over gold combo. Louisiana has typically gone white over purple in many away games this season, and in fact, has only worn the white over gold combo one other time this season. Team owner, Kevin Grey, when making the uniform choice stated about the unusual uniform choice said “the gold pants just look better in comparison to the Eagles uniform combo for this game, plus gold is a royals color, the color of a champion”.

So there you have it. The stage is set for Gridiron Bowl II, and all we have to do is wait in anticipation for what should be a great game.

Nice dub, Louisana. Also, I would like to say we beat the champions in week 1, so lol.

Wow! GSL Champs in year one!

This team had a great season, and coming down the stretch, we were becoming unstoppable. Played our best football when it mattered most.

Good game and good season to the Eagles. Always tough to knock out the reigning champs.

Congrats to the Royals on their Gridiron Bowl win. Even though we couldn't pull off the repeat, I'm still very proud of my guys going much further than anyone expected. We will be back again.

Congrats to the Royals on their Gridiron Bowl title!
The Championship banner is ready! I've been trying to catch up a little bit on the rest of the site (still need to finish the season images for the last four teams).
Sorry I didn't get to interact much down the stretch; it was just a busy time moving, then going on vacation, and I just got back from vacation yesterday, and started jury duty today, so I'm gone all day. Crazy times.

But thanks everyone for an awesome second full season. I'll get a post about the offseason coming up shortly. As a preview of that, I'm going to need a little break before anything real on the offseason begins.