The '67 Saints graphic only shows one number font, however the Saints used two different fonts in at least 1967. In some cases, the same player wore each in different games, and different player in the same game had different fonts.

1967
The first shot below is Jim Taylor and appears to be preseason (it's nighttime, and note white-striped "night" ball) and that looks like the hated Falcons on the far sideline. 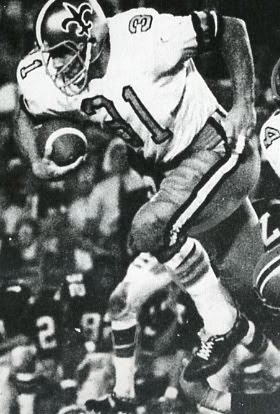 And according to this doubloon (now THERE'S scientific evidence!) they did play Atlanta in the '67 preseason (note word 'preseason' right below the player).

The pic below, apparently from the 01Oct67 game at Tulane Stadium, tells the whole story: Taylor now has the block font (and a different facemask too) while #67 in the background has the more narrow font, the name of which I don't know. Note #67's helmet stripe as well; the center white portion seems much wider than normal.

Here's Taylor in the black jersey with narrow font:

Can't post the image but here's a link to

Taylor's black '67 jersey in the HOF. I'm unable to locate a pic of Taylor or any other Saint in the black jersey with the block font in 1967 or '68, so perhaps the black jersey only had the narrow font until 1969.

Note- though the '67 graphic was my original focus, I kinda got caught up in their comedy of inconsistency so here's more for whoever might be interested.

1968
Here's the narrow font on both sets in '68; in first shot, note whi/blk/whi helmet and pants stripes only worn in '68 (and mixed pants stripes - someone's new pants must have been at the cleaners). Second shot is Dave Whitsell's punt block for a TD in the 22Sep68 home game vs. Washington. Can't find anything further on 1968 so I'm unsure whether the block font appeared on either set.

Oddly, the file name on that pic says Kilmer but #14 is Edd Hargett.

1969
I don't believe they wore the block font on the black jerseys until '69, at which point they appear to have eliminated the narrow font entirely. This looks like the 30Nov69 home game vs. the Eagles (Tulane Stadium hedges in background):

If there's ever been a team with more consistent inconsistency in three seasons' time I'd sure like to hear about it. And don't get me started on the sleeve stripes...