the '27 Football giants.... and some other Giants notes

the '27 Football giants.... and some other Giants notes

Absolutely love the site and the unveiling of the 'dark years' of uniforms...

I received my Football Giant season tickets yesterday and am ecstatic about this year's design. The Giants have gone with a uni-centric theme featuring the teams 8 championships on the 8 regular season games with the respective uniforms hanging in lockers along with helmets/footballs/trophies. The 2 pre-season feature this season's new nike uni designs. There are 3 discrepancies between the tickets and the G-U-D.

Game 6 is the 1938 uniform showing the solid-red jersey and world championship trophy. Also included in the locker is the team helmet NOT showing the winged design we've all accepted as being used. The leather helmet on the ticket appears solid blue.

Game 7 is the 1934 uniform with that gorgeous light blue uniform jersey and white shoulder/arm/cuff design (it also shows the crotch-snaps!!). The discrepancy is that the ticket shows the underarm/sidepanel being RED, not dark blue as shown in the database.

Game 8 features the '27 uniform/helmet and its drastically different than the database. the helmet is depicted as solid-white (leather of course) while the jersey is a long-sleeved deep navy blue shirt, no front number, no color accents.

Again I love this database and want to assist/help in my small way!!

Thanks Dave.
Your comments bring a smile to my face because our 'Giants expert,' BigBlueLarry, emailed Tim and I the very day he received his Media Information Guide (I think that was it) with the same images you describe and asked to provide him some photographic aids for a letter he was composing to send to one of the Mara boys about the uni-inaccuracies littering the cover.

It appears that the Giants' publication people have fallen victim to a problem quite common in attempting to translate black-and-white photos from the early days of the NFL. Simply put, in most cases, red comes across much darker than blue. Because of this, people tend to invert the 2 colors.

Here is a 1932 photo of Red Flaherty followed by a photo of the same model he his wearing shot at the Hall of Fame. 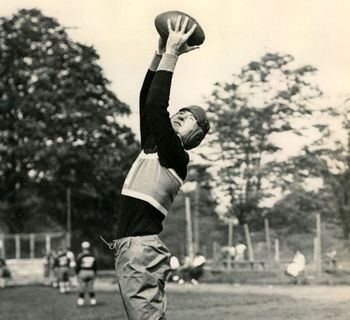 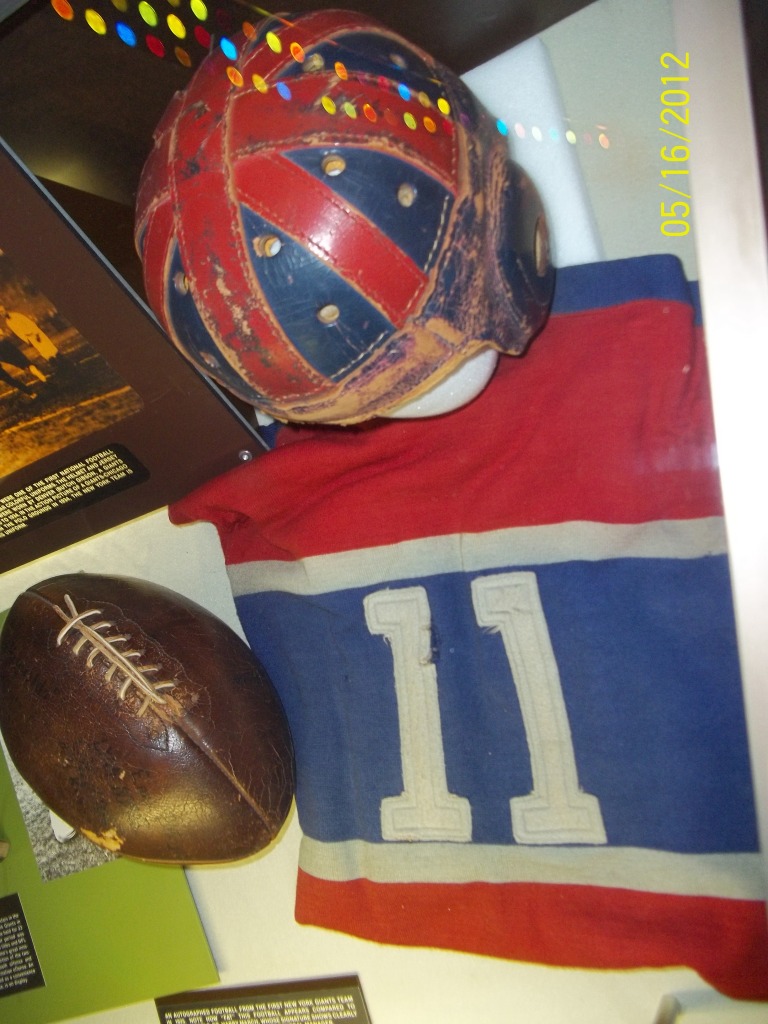 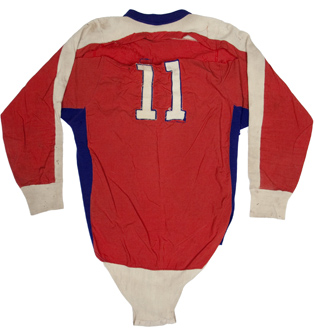 The Giants aren't the only ones to mess up their own history in the throwback department.
If you're a new viewer to the site, you may want to look back at some old blogs and threads from earlier this year.
The Steelers unveiled their new 'barberpole' throwbacks from 1934. Problem is they never wore them in the 1934 season. They actually wore them for latter parts of the previous season (along with the model that the '94 throwback was styled from) and used them for their 1934 team photo. However, when the 1934 season started, they used combinations of either plain yellow or black jerseys as well as yellow or black jerseys with the opposite colored northwestern stripes on the sleeves. Never the barberpole, though. It appears they were suckered in by the team photo instead of looking at actual game photos from the season.

Thanks again for the kind words.
Anything you come across that you find unusual, let us know.

Whew! It's comforting to know I'm not the only person who is bothered by these things!

I'll be sure to share when I hear back from the Giants.

Have fun at the games this season Dave, I will be there in spirit.

my money is on the GUD!

Bill... trust me, I use this site as gospel!!! I have been here since the beginning! I've also know Tim Brulia for years and know the tireless work he (and you as well) does! Your site is the gold standard. When I saw the conflict on the tickets I immediately called it (as the Giants being wrong!). My dad, who has gone to Giants games since 1939, just shook his head and laughed!!

Big Blue Larry... I really enjoy all your posts and analyses of 'our' team! There aren't many of 'us' giant uni fanatics... but you are not alone!!!

As I mentioned earlier my dad has been going to games since '39 and my grandfather was an 'original' fan from 1925. The history runs deep! As a matter of fact my dad just found some ticket stubs from the mid 1950's... If only he had saved all his programs and ticket stubs, etc! Oh, well!

Keep up the excellent work!