Not sure if this has been caught already, but...

contrary to the absolute set-in-stone canon of Dolphin uniform history, we have... drumroll please... SLEEVE STRIPES in 1970 Preseason!!! This has to be a case where someone wanted to make due with what they had. These would have had to be the non-meshed jerseys from 1966-69. 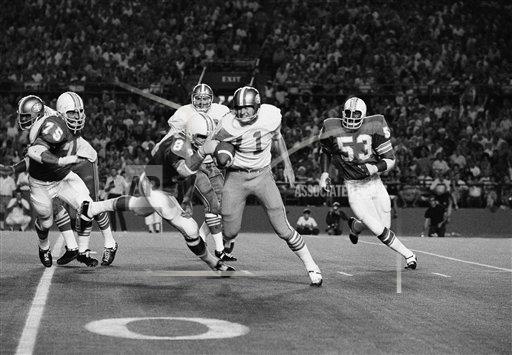 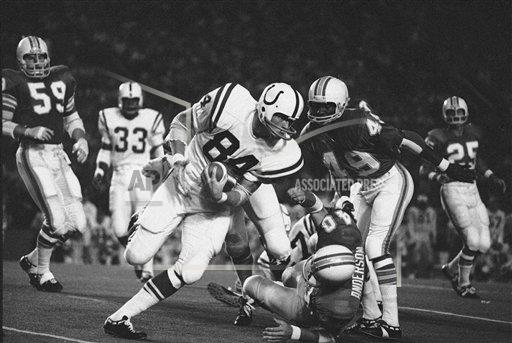 I was shocked to see this in my searching today. I had extremely little personal documentation for the crazy-quilt mishmash of 1970 Dolphin uniforms.

Thanks. If you click over to the "NFL Preseason" portion of the Forum, there is a thread that we started regarding the location of photos for every preseason game for the purpose of trying to find those pesky 'preseason only' uniform combos.

With the merger taking place prior to the start of the 1970 season, our own Timmy B began the process by starting with the seasons in the 2000s and slowly working back towards 1970. The fruits of our labors will be added in as soon as we finish updating each of the teams in a really BIG way - check the most recent blog entry!

1970 was a 'banner' year for 'preseason only' combinations. In addition to what already exists in the site, Tim has located more 'unique to preseason' combinations for the Jets, Raiders, Saints, Lions, Broncos, Rams, Redskins, Patriots, and yes...the Dolphins for the exact reason you just pointed out. Of note, it would be almost impossible to tell on B/W photos but the Dolphins updated their shade of aqua going from 1969 to 1970 with the 1970 version being slightly lighter/brighter than the 1969 variety. As you stated the non-striped jersey was what they wore throughout the 1970 season so the striped version would not have been made in the new shade of aqua. It is extremely likely that both shades of aqua would have been worn in these preseason games.

The 3rd posting in that Preseason photo thread contains a list of preseason games we have yet to uncover a photograph from. Any help that can be lent in that direction would be greatly appreciated.

Found a few more oddities. First, Oakland cornerback Henry Williams' jersey had a serif nameplate for at least part of the 1979 season (as seen in this screen grab from the 1979 Monday Night game vs. New Orleans) 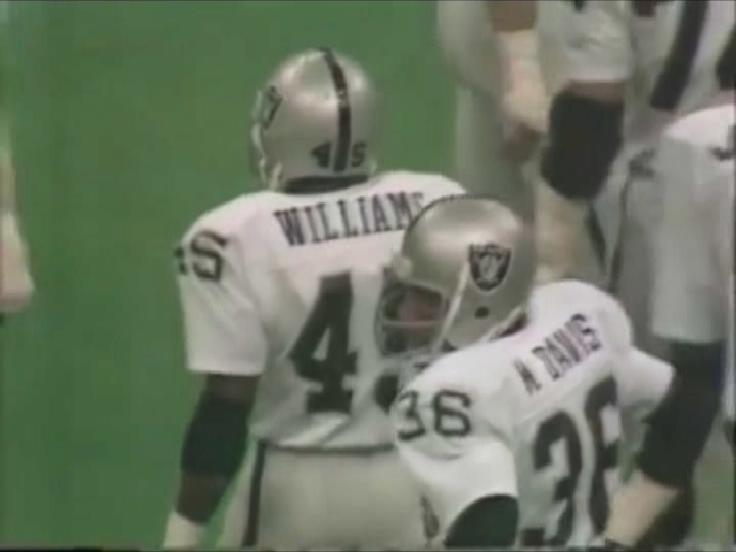 Was just watching an upload of the 1990 NFL Films project Big Plays, Best Shots and Belly Shots of 1989 Season (which my dad apparently recorded part of a slightly different version off an airing on my local CBS affiliate in September 1990 and which I just ran across today {this was one of those projects I was wondering what it was}); and Packer offensive tackle Ken Ruettgers at some point was still wearing the 1984-88 jersey with the Packer logo on the sleeve 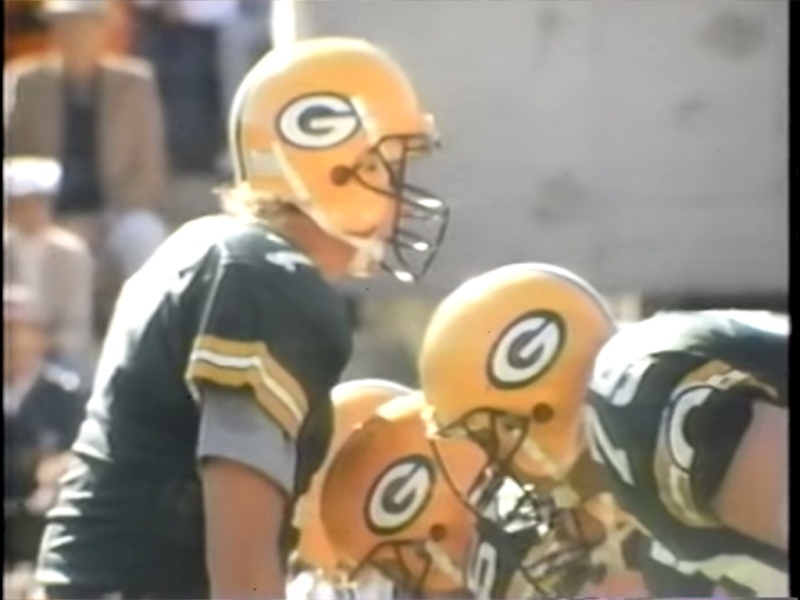 I happened to see the Week 10 Game of the Week from 1967 between the Steelers and Giants. Approximately 1:40 into the video, the Steelers are in the process of trying a field goal. The oddity stems from the fact that the Pittsburgh holder, Dick Hoak, has no face mask.

The supposed two previous references to the "last player to play without a face mask" were Tommy McDonald (year?) and Garo Yepremian (1966), yet nothing on Hoak. 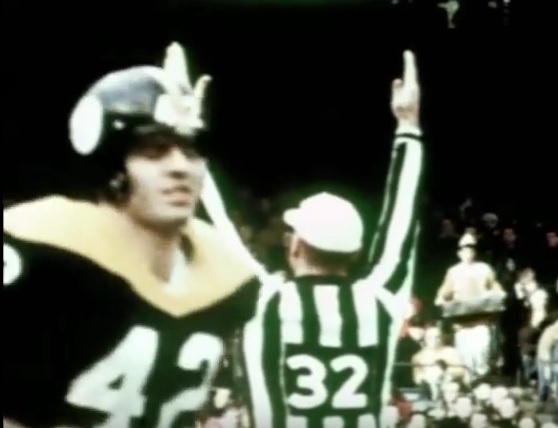 From Week 3 this season - Kirk Cousins sock stripes are upside down.

DL Jeff Yeates wears a 1978-model Falcons jersey w/o the white outline on the sleeve logo during the 1/4/81 Divisional Playoff vs Dallas. 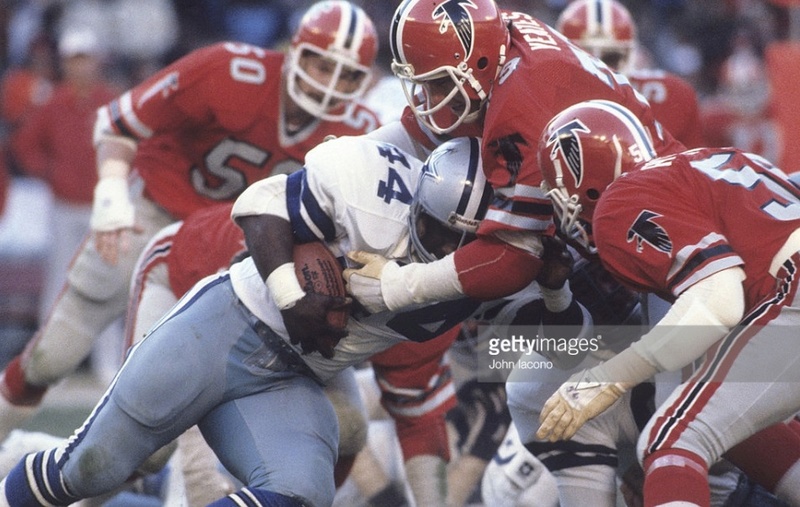 This was brought to our attention by GUD visitor Ray Gryder:

"Was watching YouTube link for This Week in Pro Football 1970 recap of week 11. During the Chiefs v Chargers game at 40:07, Charger defender joins the tackle. His helmet clearly displays the 1966 blue bolt design. Again 43 (Jim Tolbert) comes on screen at 40:27 confirming the throwback 66 helmet. Pretty cool!" 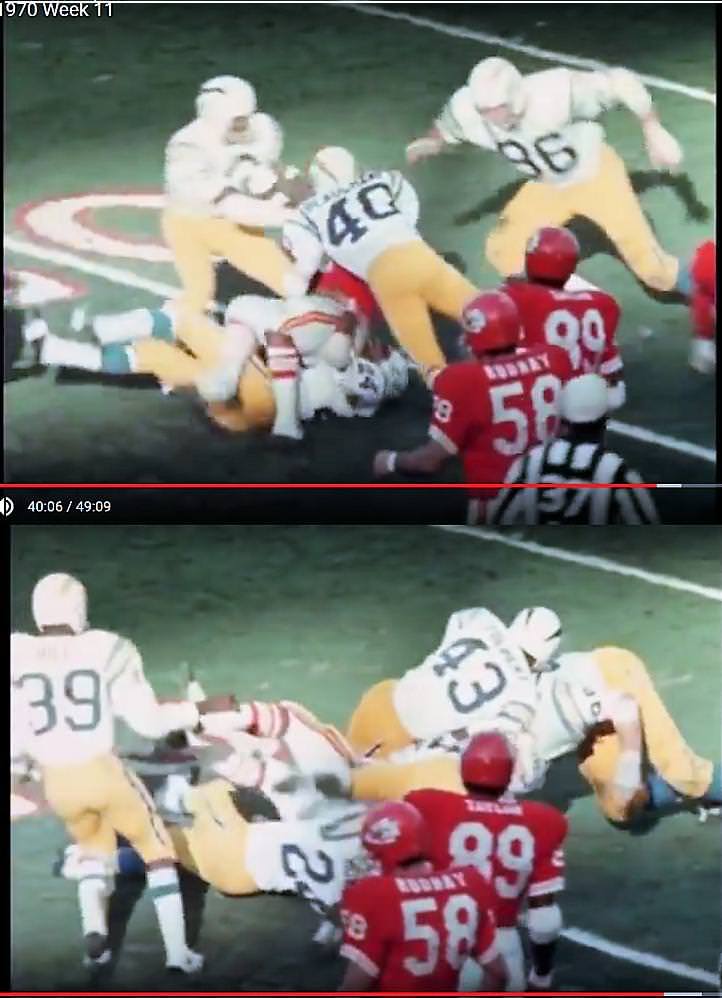 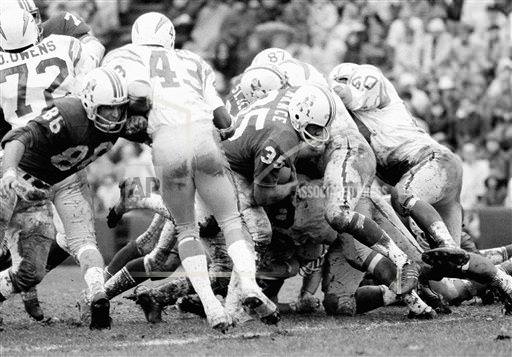 The navy blue bolts that were worn at Kansas City was a likely single-game anomaly.

Buddy Young is wearing a leather helmet, all the other visible Yankee players are wearing plastic shells. 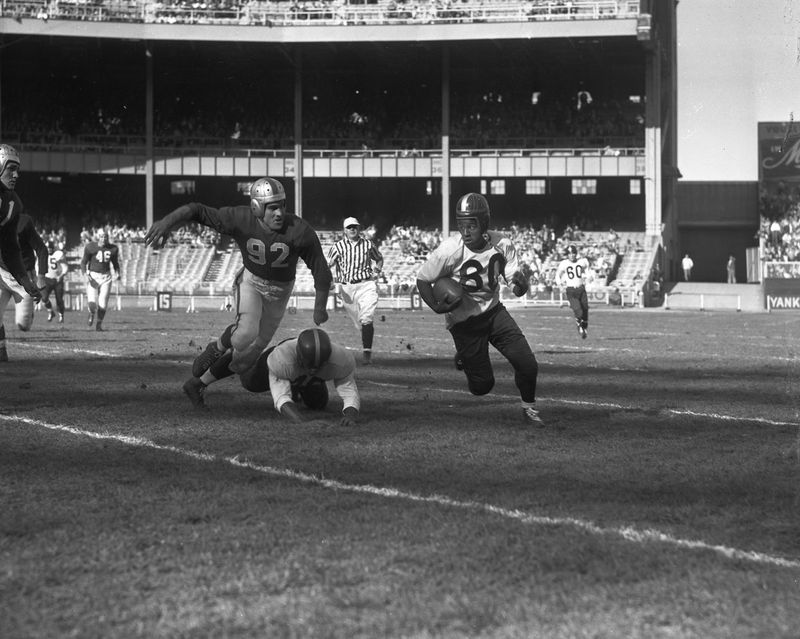 #17 Mecole Hardman of the Chiefs wore his white striped socks that are nornally worn with Kansas City's red pants during Super Bowl LV. 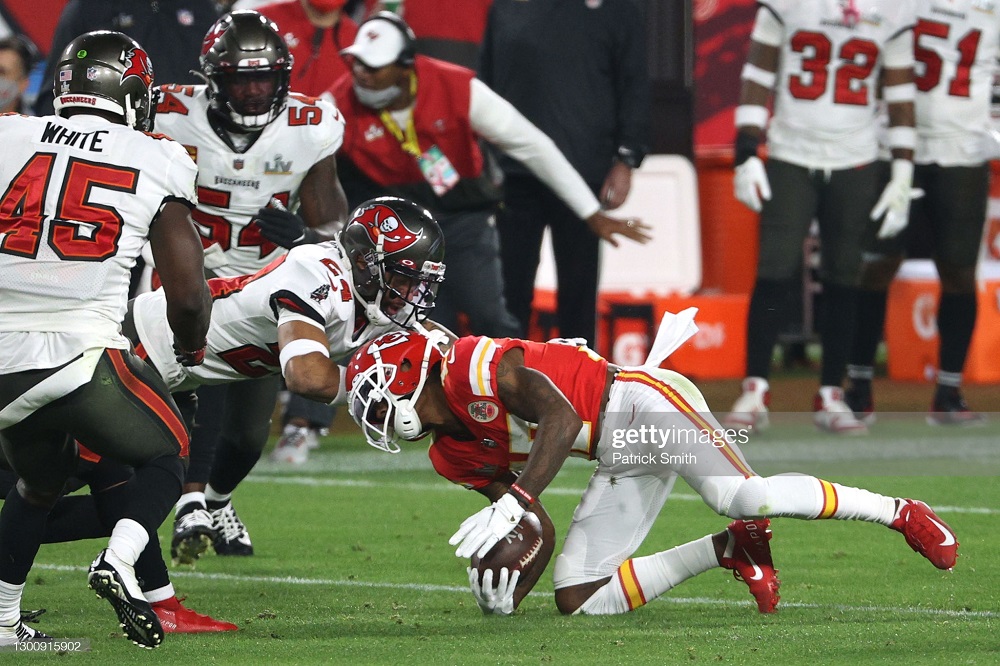 The rest of the Chiefs wore the regular red socks. 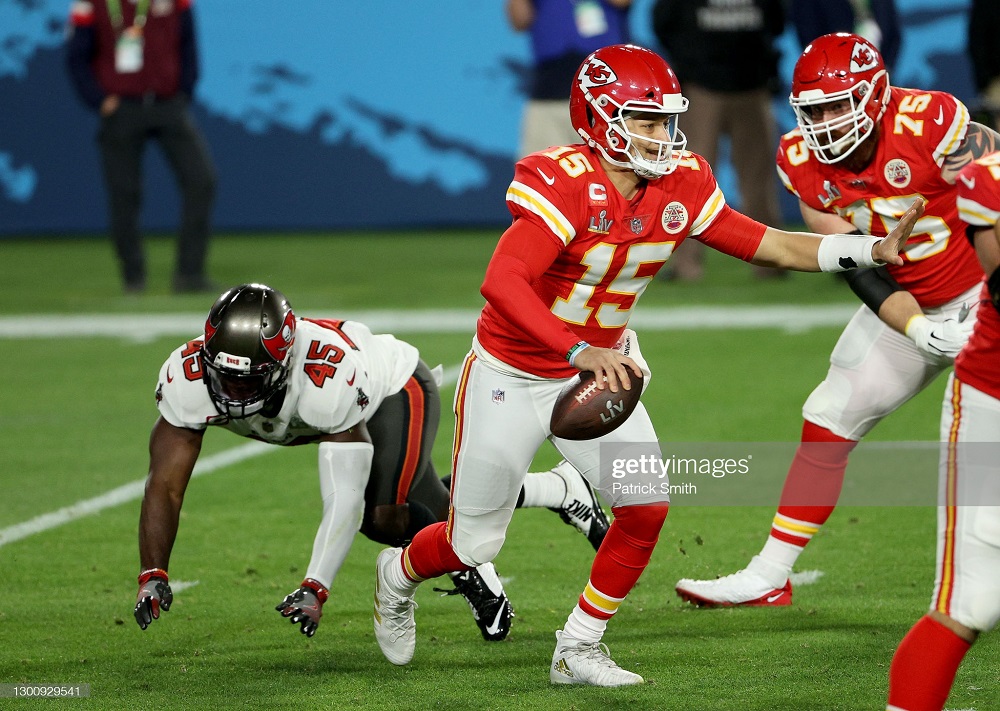 This photo of the 1985 Falcons wearing different versions of their helmet logs was sent to us by visitors Ryan Smith and Steve Foster. 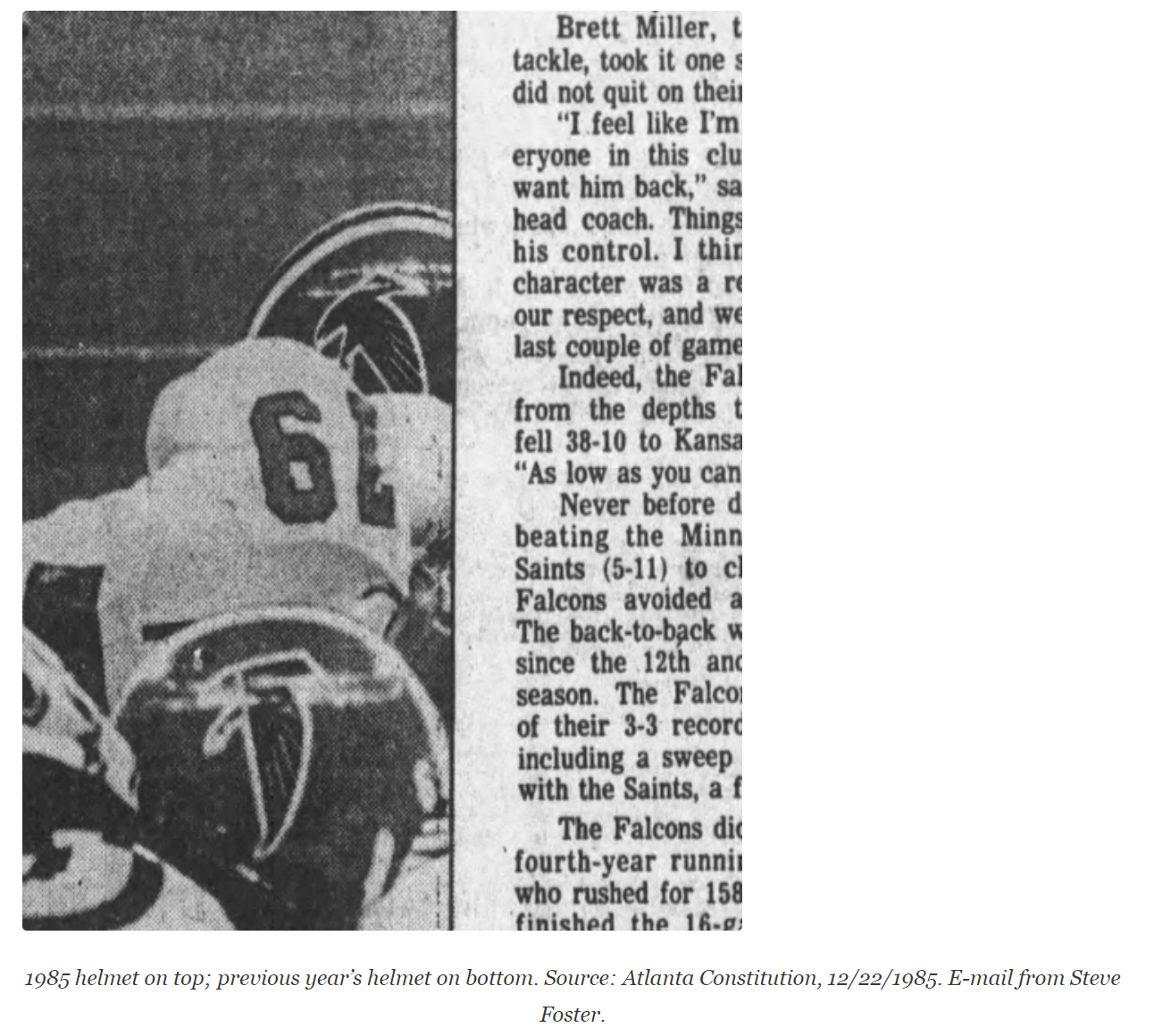 Both the Chiefs and Bengals came out for pregame warmups in white jerseys, which led to this: