Yesterday a photo was posted on Uni Watch showing the Lions in their dugout at Tiger (Briggs) Stadium. It shows 3 Lions players wearing the golden helmets worn in 1953.

We know that in 1953 the Lions broke with tradition and wore gold helmets for all but 1 game (They wore royal blue helmets for a night game against the Colts). We have come across several photos of the gold helmets. Several captions for these helmets document the fact that the gold paint of the era included copper in it. Over time, the copper oxidized and produced green splotches on the helmets. This is evident in photos of Bobby Layne's gold helmet

We would like your assistance. Can anyone out there inform us how far beyond the 1953 season these 'gold' helmets were still being worn?

It is my belief that during the following seasons, 1954-56, some players may simply have told the equipment manager "Don't paint mine silver. Keep it gold." This would explain why all of the silver helmets are nicely painted and completely silver while some still remained golden. We think the photo above is most likely from 1956 - as evidenced by the presence of the TV numbers on the sleeves (Thanks, Tim!).

The only problem with this logic is that most of these helmets were reportedly painted on the inside of a clear plastic outer shell. It is this 'silver' paint inside the helmet that is possibly the culprit here and may have 'degraded' into gold. If this is the case, it would have likely been impossible for an equipment manager to strip this 'silver-paint-gone-bad' out from the inside of the helmet and repaint it on the inner shell with a fresh coat of silver. To me this indicates that the above photo must have players mainly in NEW silver helmets with a few players opting to keep their (possibly) more comfortable, broken-in 'gold' helmets from the 1953 season.

That link above to the May 2009 UW lead article also includes one other important snippet of information that I think has been largely overlooked...
"Another issue, which needs edification, is the 'amateurish' greenish splotches [that] adorn the helmet’s shell. One might think that a professional football helmet would never have such discoloration. While that assumption is probably correct even for the 1950s, there is a plausible explanation. The gold paint used during this period was not pure; it was a blend of yellow, golds, and copper. The copper pigments had a tendency to degrade and turn green." The affect of which we still see today on pennies that develop a greenish residue over time.

The other question then is, if the majority of the players had nice silver helmets, why did some retain the 'golden' ones? Sure the reason could be as simply as personal comfort as stated above. But maybe something more devious was at hand.

We already know that back in the 1940s the Lions experimented with wearing 2 different colored helmets - one color for linemen and one color for 'skill' players. It was thought this was done to help the quarterback identify targets downfield. Could these players be wearing the gold helmets amongst the rest of the team's silver ones for some alternative purpose similar to this?

In February 2012, this thread was created in this very Forum https://gridironuniforms.forumotion.com/t394-1953-detrit-lions-gold-helmet

In it, a gentleman posted an email he received from the Lions saying that the 1950s helmets had blue stripes (we posted photos showing they did not) and were never intended to be gold. As we were able to prove that the blue stripe never existed, that pretty much calls into question the accuracy of the Lions' recent statement regarding the lack of an intention to 'go to gold helmets.'

The 10/14 UW photo clearly shows that the majority of the team pictured clearly had pristine silver helmets while a few are clearly of the 'gold' variety. This photo is NOT from 1953 (ie the TV numbers).

Whether or not these helmets were INTENDED to be gold or not, it doesn't change the fact that they WERE gold. A modern day comparison, of sorts, would be this year's Minnesota Vikings helmets. The team states that the intention is to match the purples of the helmets with the purple of the rest of the uniform. Clearly the matte purple on the helmets does not match the rest of the uniform and we at GUD depict that. What the 10/14 UW posted Lions photo does is confirm that these gold helmets existed and were clearly different from the standard silver versions.

Different theories can exist as to why they ended up the color they were. Did they start silver and turn to gold? Did they start as gold and later develop the characteristic green splotches due to the presence of copper in gold paint? We may never know the 'why.'

The only thing needing clarified remains...How long after 1953-56 were some Lions still wearing these 'gold' helmets?

No date, but i found this Bobby Layne helmet on an auction site:

If these started as silver and changed to gold because of the silver paint deteriorating into a gold color, would you expect the gold color to be perfectly uniform all over the helmet with zero subtle differences in the shade of gold like we see on this Layne helmet?

Also, the greening is from the copper in 1950s gold paint. You wouldn't have copper in silver paint. I'm more and more convinced these helmets were intentionally painted gold. 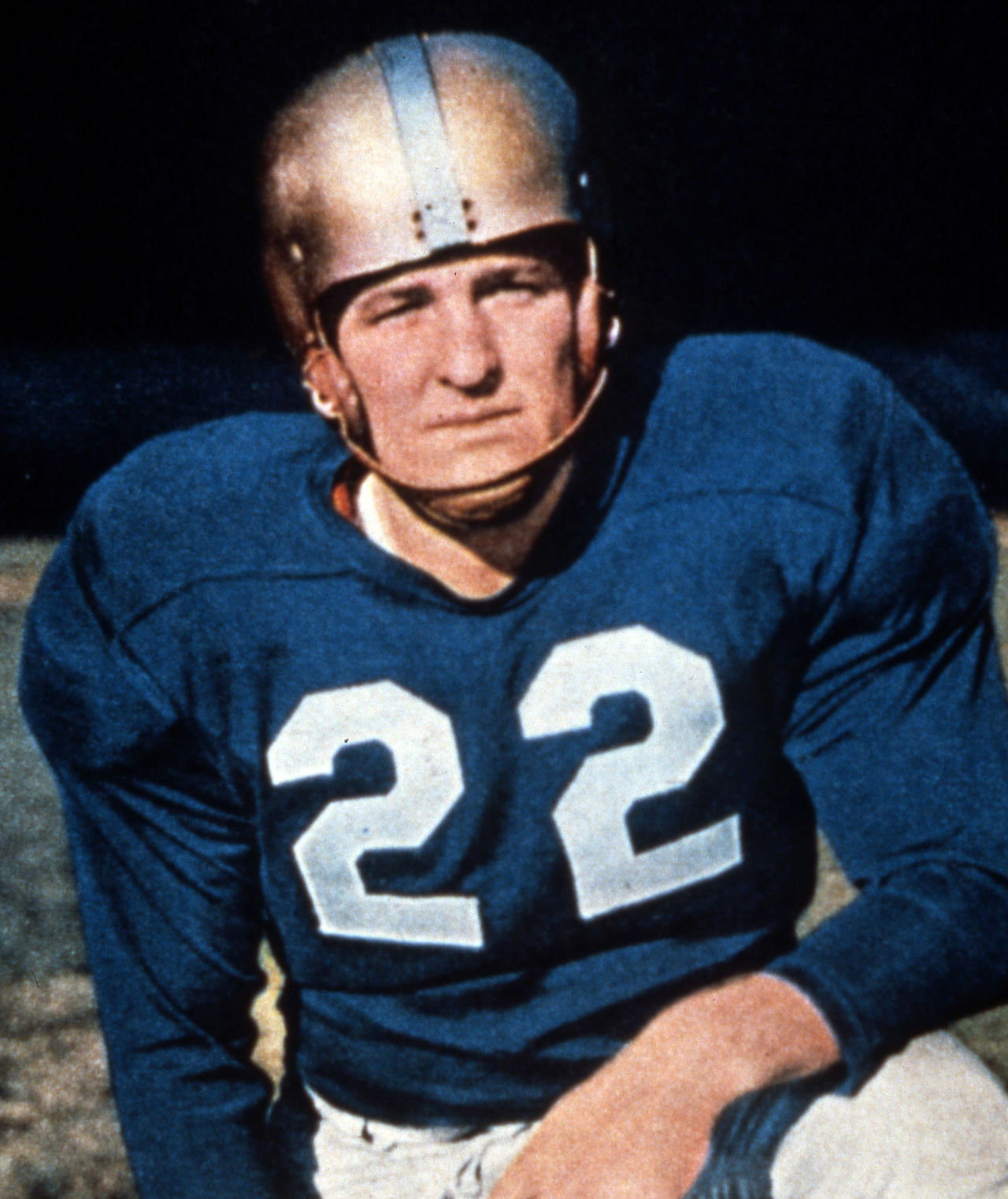 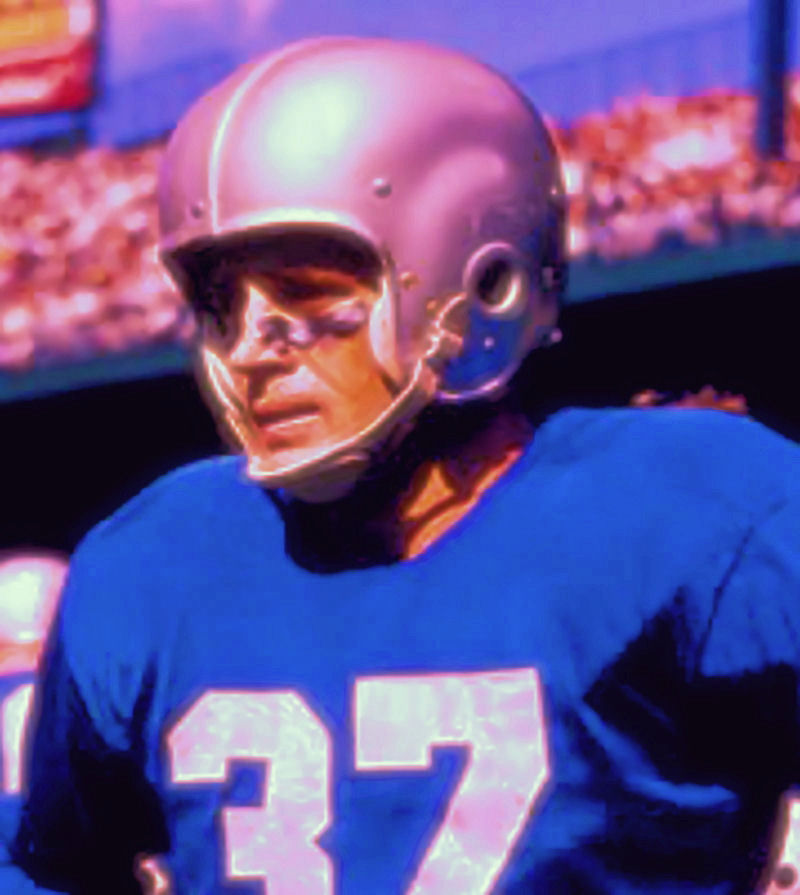 They are silver helmets - it wasn't paint oxidizing to gold, it was the actual clear plastic Riddell used on the early RT helmets yellowing.  These helmets were made of three pieces - a left side, a right side, and a center ridge.  The sides were clear and painted on the inside of slightly yellow plastic.  The center ridge was painted on the outside, so it stayed silver.  These turned "gold" because the started out somewhat yellow and yellowed even more as the season wore on.  Players back then kept helmets pretty much until they were destroyed and couldn't be repaired; when these RTs cracked (and they cracked very easily) they were replaced with Riddell RK helmets - which were 100% painted on the outside so they stayed silver.  You will likely see some players with both for a few years.

This likely wasn't a conscious decision to have gold helmets with a silver center ridge; it's just how it worked out - like some pants in the 1960s and 1970s fading to a "two-tone" effect.

I get that. But then why, if they can paint them blue for the night games, couldn't they have painted them to stay silver?
Unless they just didn't mind them being 'gold.'

Bill Schaefer wrote:I get that. But then why, if they can paint them blue for the night games, couldn't they have painted them to stay silver?
Unless they just didn't mind them being 'gold.'

That might have been part of what accelerated the yellowing - painting them blue and then stripping off the blue paint a few times per year.  I suppose that once they changed to RK helmets (painted on the outside) they just kept painting them blue, then repainting them silver during that era.

The NFL was really a shoestring operation back then - a lot of teams really did things on the cheap to survive - and the Lions were known as being one of the tightest teams for things like that back then.  If you look at some of their game used helmets from the 1950s and early 1960s it almost looks like they were continually painted silver with a paintbrush - they weren't even spray painted once they left the manufacturer (not counting the 1960s-era clear shell helmets like Macgregor that were painted on the inside at the factory).

That still leaves the question, how did the green (residue from copper in 1950s gold paint) get there if they were never actually painted with gold paint?
Not a metallurgist or chemist, but it seems unlikely that silver paint would have had copper in it like gold paint did back then.

That still leaves the question, how did the green (residue from copper in 1950s gold paint) get there if they were never actually painted with gold paint?
Not a metallurgist or chemist, but it seems unlikely that silver paint would have had copper in it like gold paint did back then.

No, I think they painted them blue on the outside; Riddell painted them silver on the inside.  It's possible that the green we are seeing isn't a greening of copper in gold paint but might be more an aftereffect of the blue paint getting scuffed into the shell - it appears to be on the surface of the Bobby Layne helmet.  Since the shells could get really yellow we are getting a bit of the old "yellow + blue = green" rather than an oxidation of gold paint (comparing Layne's helmet to say a 1952-1958 Gibson Les Paul Gold Top that has oxidized).

Of course the early '50s RTs were better than this prototype, but check out how the plastic warped and yellowed in the 1939 prototype from Riddell's website: