Here is an interesting photo I found, originally mis-dated 10/26/58. We know the Baltimore Colts wore these three-stripe jerseys and socks in 1956. 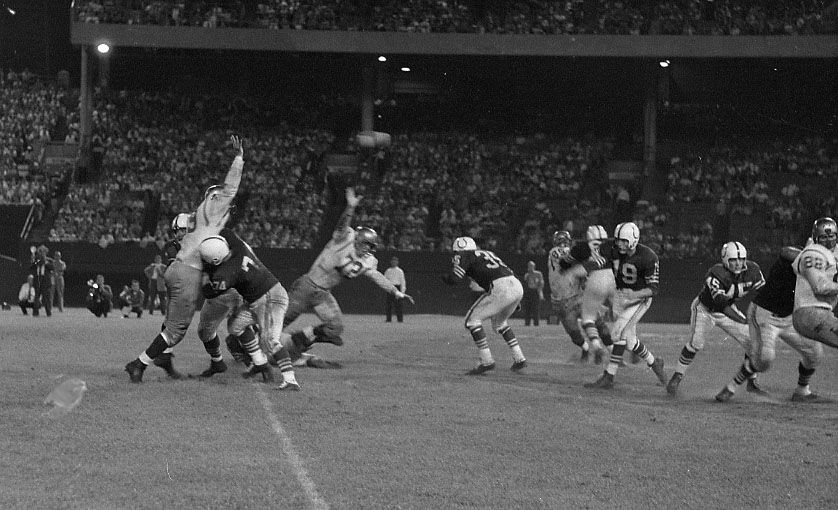 Now the Colts hosted the Redskins (who are identified as the opponent here) on 12/23/56, but there are two things that lead me to believe this is incorrect as well. First, the Redskins wore white pants with their white jerseys that season, and they had burgundy-gold-burgundy UCLA stripes over the shoulders. This picture shows a single shoulder stripe. Second, the people on the sideline are not dressed for December weather in Baltimore.

The uniforms for this team in white jerseys actually looks like a close match for the 1958 49'ers. Is it possible this is a 1958 pre season game where the Colts just threw on an old set of uniforms? Note that #74 does not have the horseshoe on his helmet, and #35 is wearing single-stripe pants while the other Colts are wearing two-stripe pants..

May require adding preseason only combo wearing 1956 3-stripe jerseys and socks for Baltimore. I think the 1-stripe pants are an anomaly.

Not as concerned about the Skins stripes as the lightness may be a 'trick of the light'. Everything about them seems right including the TV numbers.