Been interested in the the 1960-67 Patriots pants striping for a long time. Here's a shot I've had for awhile, but can't remember where I found it. Looks like their 1960 pre-season pants had red-white-blue strips rather than red-white-red: 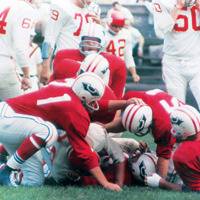 Here's a screen-grab from "Full Color Football;" from the helmets and jerseys, it appear this is from 1960. It may be a little hard to detect in the still shot, but in the video you can clearly see the pants stripes are blue-white-red-white-blue: 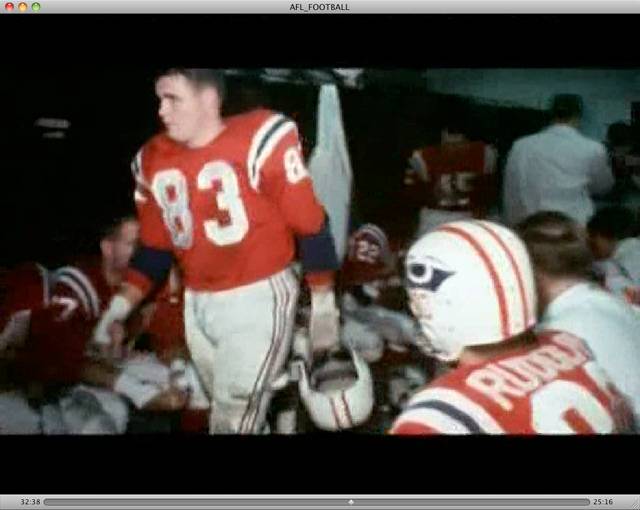 And finally, one of my whales... The Patriots' 1963-67 pants have always intrigued me, as most uniform sites have depicted the stripes as red-white-blue-white-red. Yet in every color picture I've ever seen, it always appeared to me that that each stripe was the same color(s). Years ago I thought I could faintly detect that each of the three stripes was blue-red-blue, but I could never find a good enough close-up to verify this... until today: 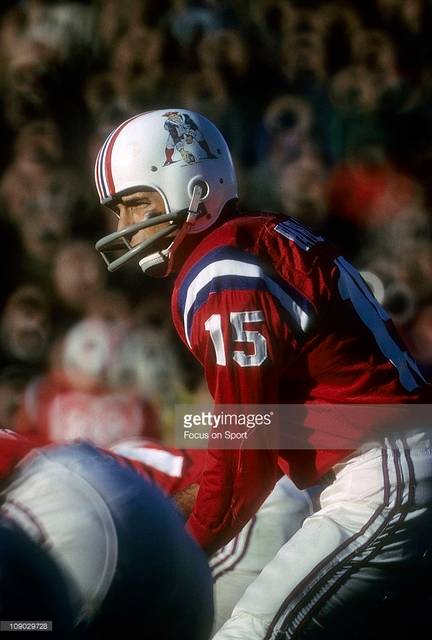 Pretty sure they wore this design from either '63 or '64 through '67. More Patriots stuff to follow...

Tim and I are just getting around to analyzing the 1961 and 1960 preseason so this is good timing.

For your 1960 preseason photo...
- Yes, I agree about the pants stripes. Instead of both being red, one of them is blue. Notice on #51's (bottom right) left leg, the front stripe is red and the back stripe is blue. In other words, the two sides are mirror images of each other.
- Also, the stripes are both blue on the sannies rather than one red and one blue

For your 1960 Regular season photo (since numbers are present on the helmets)...
- Notice how close to the nameplate the back numbers are.
- I also agree that these pants stripes are b-w-r-w-b

For your third photo...it would be really helpful if we knew what year this was. The Pats wore these red jerseys with b-w-b shoulder stripes from 1961-64 (in 1965 they changed to w-b-w). I may be coming around on your pants stripe theory. Do either of these photos help?
This first one is the same as yours but blown up a bit more. 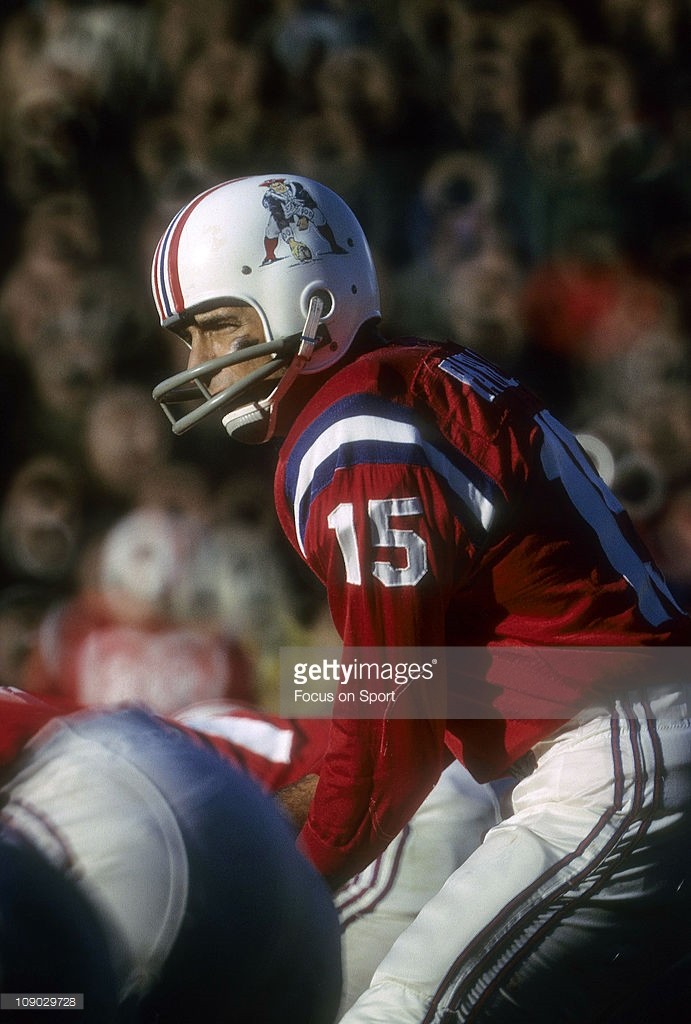 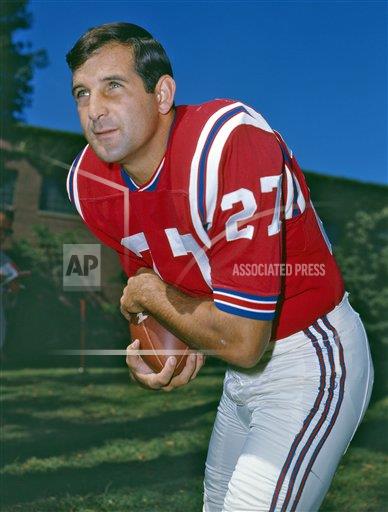 It almost appears that each stripe is red with a thin blue outline on both sides.

- The other thing I like is the fact that it shows the 1s on the jersey without a lower serif. I wish we could find out if this was the case for the entire run (1961-64) of these red jerseys. I'd also like to know if the same was true for the white jerseys for the same time period.

Thanks! Yes, I think these pics confirm that the striping pattern was blue-red-blue on each of three stripes separated by white.  As for the white jerseys, here are a couple pics which give us info about several of issues...

This one shows the sans-serif font; I'm almost certain this is from 1965 because of the Jets helmet decal. Also, note that the pattern on the shoulder stripes is blue-red-blue, not the red-blue-red that is currently in the database. You can also see that the Pats are wearing the multi-striped high socks with the red-white-blue short socks: 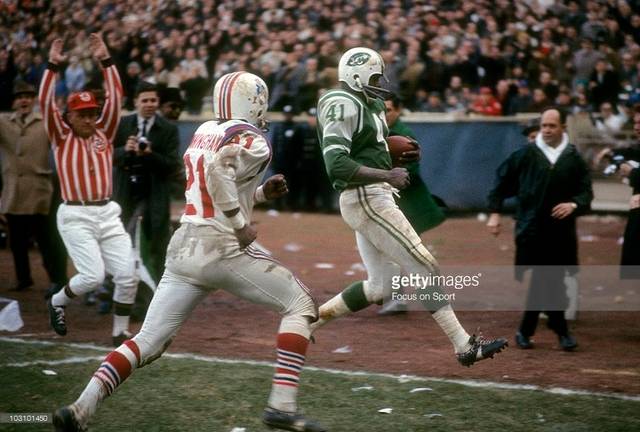 Here's another pic with a better look at the shoulder stripes, as well as a sans-serif "2" on the player at far right. I have confirmed this is from October 31, 1965, as that is DB Tom Hennessey of the Pats with the ball, and from the box score he did indeed have an interception that day: 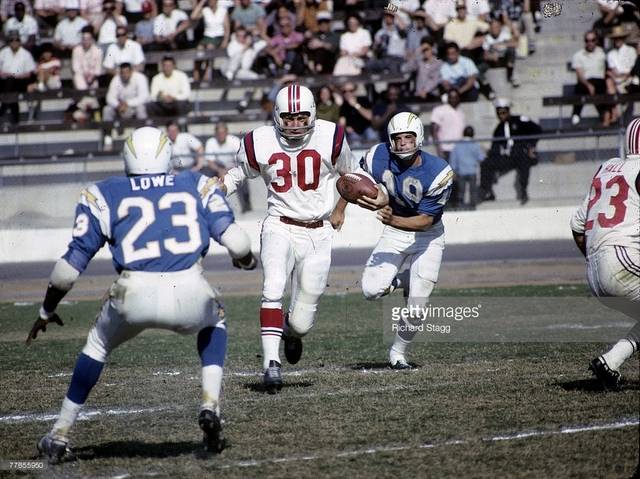 I believe the Pats road jerseys also had blue-red-blue shoulder stripes in 1963; here's a link to a video of the 1963  Championship game (played on January 5. 1964), and about 5 seconds in there's a decent closeup:

Here's a B&W photo of the championship game which shows a serif "21": 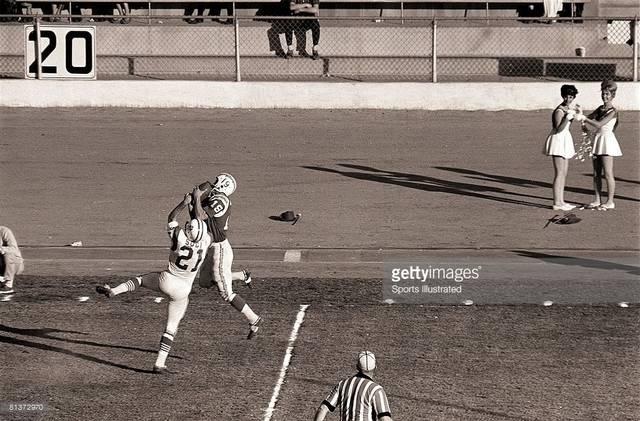 Still working on finding pics that I can verify are from 1964... 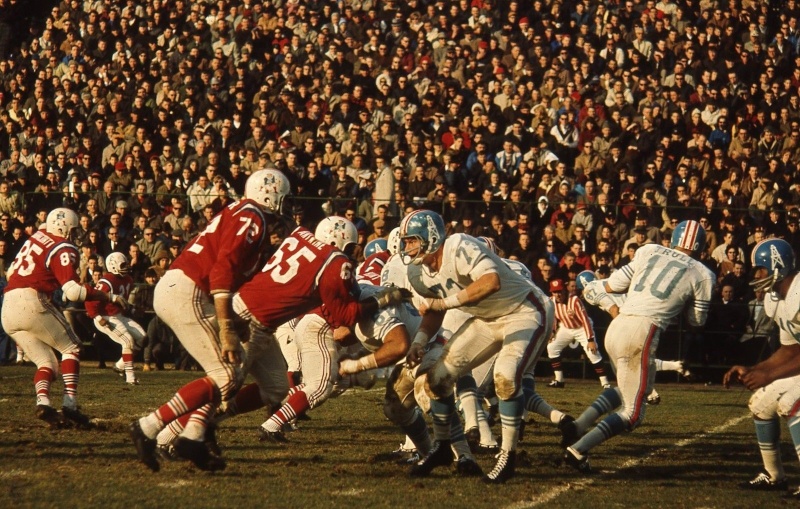 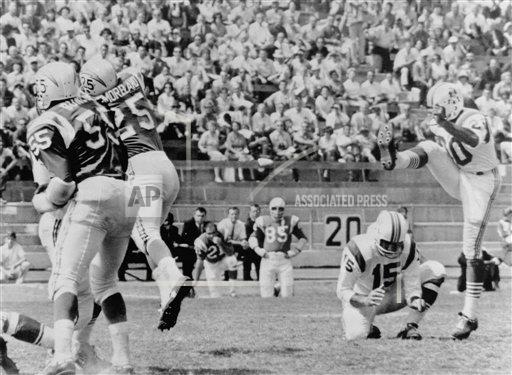 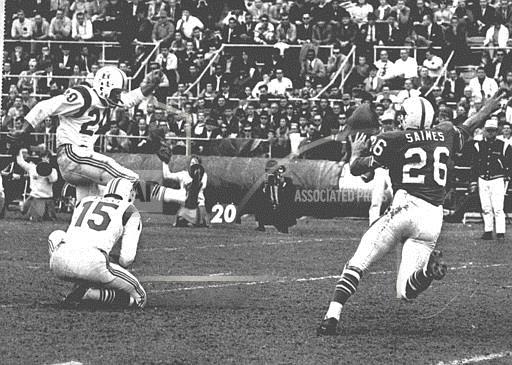 Cool. Your color photo from 1964 confirms that the homes were the same in '64 and '65, and from your B&W pics I would be willing to wager that the roads were, too.

Can you find a color photo because we currently have the 1963 pants stripes being red-blue-red? Seems weird that they'd have those with different stripes for one year before going to these identical red stripes with the thin blue outlines.

Your clip from the 1963 AFLCG at about 1:22 has a close-up of the Boston sidelines and looks to me like b-r-b on the pants but its hard to tell with the yellowing of the film.

This collection of 9 photos from the 9/1/63 preseason game between shows a couple of things.

Click on each photo once to open it and click on it a second time will enlarge even further.

A couple of the close-up photos make it look like these pants had the 1964-66 red stripes with the thin blue outlines on each stripe. This would account for not beeing 100% certain to tell the colors of each stripe.
Also shows definitive red belts for Boston, as well.

Great find! I've looked at other parts of the Tales from the AFL site, but somehow missed these. Although it's hard to make a definitive determination like we can with the '64-65 pics, I am almost certain the '63 pants have the same b-r-b x 3 striping pattern.

Yep, that was my conclusion as well.