It all started with this photo of Roy Gerela kicking against the Rams (with no name on his back)... 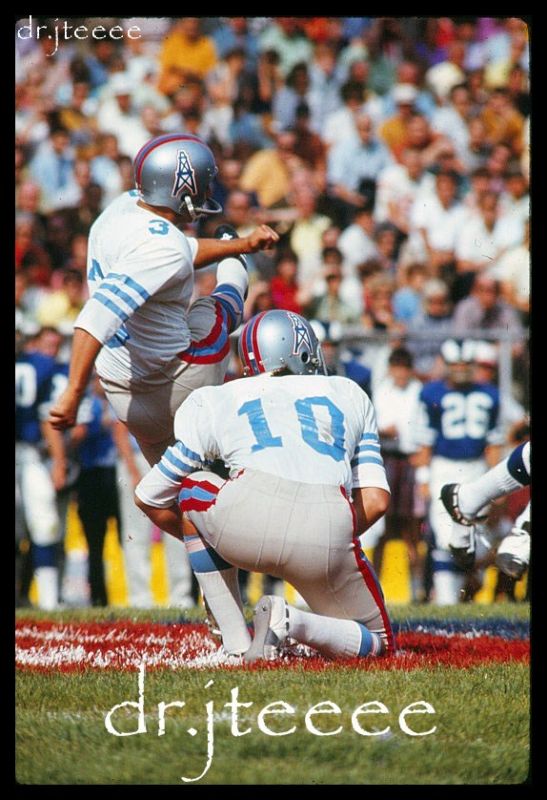 WTF... what jerseys are the Oilers wearing?

So I searched on Getty...

According to profootballarchives.com the Oilers played the Cowboys that day, so it's 1970... Wait a minute, Lynn Dickey was drafted in 1971!

And what about the Rams?
The Oilers played the Rams in Canton in 1971 and this article has a photo that shows the three-striped white jersey
http://news.google.com/newspapers?id=ll8sAAAAIBAJ&sjid=XM0EAAAAIBAJ&pg=2386,63473&dq=oilers+rams&hl=en

and Gerela was there

Gerela was cut by the Oilers on 9/2/71, with the Steelers soon picking him up.

They appear to be the 1965 jerseys with
A) TV numbers moved to the shoulders and
B) as pointed out, no nameplates

I saw an article from this era that said Bud Adams was cleaning house after the Wally Lemm era ended, with a new coach, new uni's, and obviously, new players. Lemm's first year (in his second stint) with the team was '66, so I get the feeling Bud must have doing a Soviet-style whitewash of Lemm's time while waiting to unveil the new duds. It's obvious they didn't bother putting on NOB's for these temporary uni's, and the shift of the TV numbers must have been to conform to changed uniform rules.

According to the database they didn't change the uniforms in 1971

As an aside, do the Oilers changed to gray belts in 1971?

According to the database they didn't change the uniforms in 1971

Which makes the use of the old uniforms for the whole preseason even more nonsensical.

Maybe they just wanted a more breathable jersey for the preseason