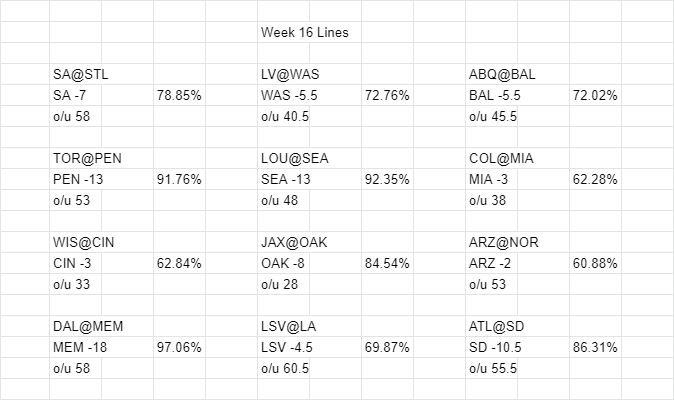 No time for a game by game preview today, but maybe tomorrow.

First, let's start with the biggest upset of the week, with the Royals shocking the Sockeyes, 26-23. The loss for the Sockeyes ends there season, no way around that. They were given a cupcake schedule to finish the year off, and they couldn't beat the worst team in the league, after coming into the game with a 92% win probability.

The Knights helped themselves maintain their wild card status, with another win, this time over Wisconsin, who still had some outside chance if they would have gotten a win yesterday. The Knights are in a really good position at this point in claiming a wild card spot, with three weeks remaining on the season.

For Toronto, the coaching change this past week didn't help them much, as the Keystones got back to what they do best, winning football games. Pennsylvania is now just one more win away from claiming the #1 seed in the Eastern Conference. I'd say it's a good thing for them to have to keep playing meaningful games with 3 weeks to go, so they are on top of things by the time the playoffs do start. The Terror may be on the outside looking in at the playoffs right now, but they should not be counted out with plenty of games left on the season.

Washington had a great opportunity to pick up a win, and the squandered it. The defense picked up two touchdowns for the Stars, and the offense had them in front late. Shockingly, it was the defense that lost the Stars the game, with under a minute to play. This loss knocks them out of their playoff spot for now.

Baltimore has been fighting their way all the way into a playoff spot since a rough start to the year. They've now won 6 of 7, since week 9, after a 3-5 start. They've got a lot of momentum, and need to keep it going. They've got three games left, none of which will be easy. The Washington game to end the year could decide the last wild card spot, but Baltimore's fate could depend on how Toronto finishes the season. Either way, the Bluebirds are in the drivers seat for a playoff spot now, so their fate is in their own hands.

Memphis had a little scare, but they pulled out the victory, keeping themselves on top in the Western Conference. Big game for them next week on Sunday night.

The division lead for the Captains didn't last long, as they lost in Oakland this week. For the Lightning, maybe they've gotten a spark back into the team with the coaching change. The South division could still come down to week 19, but Louisville does not want it to come to that.

Oakland has been consistent the past few weeks, winning 4 in a row. With all the battling going on at the top between Arizona, Colorado, and Memphis, the Icons find themselves with a shot at the #1 seed in the Western Conference, after really been slightly forgotten, and this has fueled the team in their run. Oakland has just won the Pacific division, but they'd move up to the #1 seed with a win next week, and a Memphis loss. Then the fate of the #1 seed would be in their hands.

Arizona had a shot at the West's top seed last night, but they could not overcome the leagues hotest team, the Norfolk Commanders. The Commanders took care of business, and now find themselves East division champions, after pulling off 10 straight wins. The Commanders still have an outside shot at the #1 seed in the Eastern Conference, but at worst, they have the #2 seed locked up, meaning a home gain int he divisional round against a team from the weak South division. Not a bad spot to be in.