I came across something interesting that I'd forgotten about.

From 1967 through I believe 1968, the Giants white jerseys had a blue collar.

I had trouble finding a good photo of the Giants white jerseys from 1969. The one above was the best I managed. I'm pretty sure the collars are white there, but it's not easy to tell.

I know that starting in 1970 the Giants used two white jerseys. I made sure to look for the ones with the fat sleeve stripes to ensure that they were not simply holdovers from '67-'68. You'll not that both white jerseys indeed have a white collar.

Also, I believe the dates for the photos are correct (I learned my lesson from yesterday!)

From two different photos I saw, it looks like there was only a white collar for 1969. I couldn't provide a link for the New York Times photo (p. 66 from the 12/1/69 edition), but below is one from the Milwaukee Journal from the 11/30/69 Giants-Packers game:

I got your messages.

Give me a few days and I'll see what I can dig up for you.

I have the 1967 Giants NFL Films highlights in my ol' video collection. I'll pop it in the VCR this weekend with an eye on the jerseys and will also go through my library looking for any scan worthy photos.

For 1967, I also came across this pic with Sir Francis getting an earful from Allie Sherman and also note Homer Jones in the background. This from the home opener against the Saints. Both look to have a normal white collar:

I'm leaning against a blue collar for 67 & 68 on the whites unless we can come across Giants other than Tark during these years.

Still, appreciate your devotion to the cause!

OK, I finally found a color photo from 1968 showing a Giant other than Tarkenton wearing a blue-collared white jersey.

I did cross referencing with Pro Football Reference and your White-At-Home database. Interestingly, 4 of the Giants 7 road opponents in 1968 went WAH, meaning the Giants wore blue for 11 of their 14 games (explaining my difficulty in finding them in white for that season.) Those games were 9/22 @ Philly, 10/13 @ Atlanta - represented in a photo of Tarkenton above, and 10/27 @ Washington.

Given that there are sideline personnel wearing red jackets, Philly is ruled out. It's either another pic from Atlanta or maybe from RFK in Washington. It's defintitely from the '68 season, given that the Giants are wearing solid blue socks.

And just for the heck of it, here's another Tarkenton pic from Atlanta.

Here's a link to an AP photo of the Giants wearing white @ Green Bay during the Pre Season, but it's impossible to tell anything from it.

Found this today. Chuck Mercein's 1966 jersey with the blue collar. 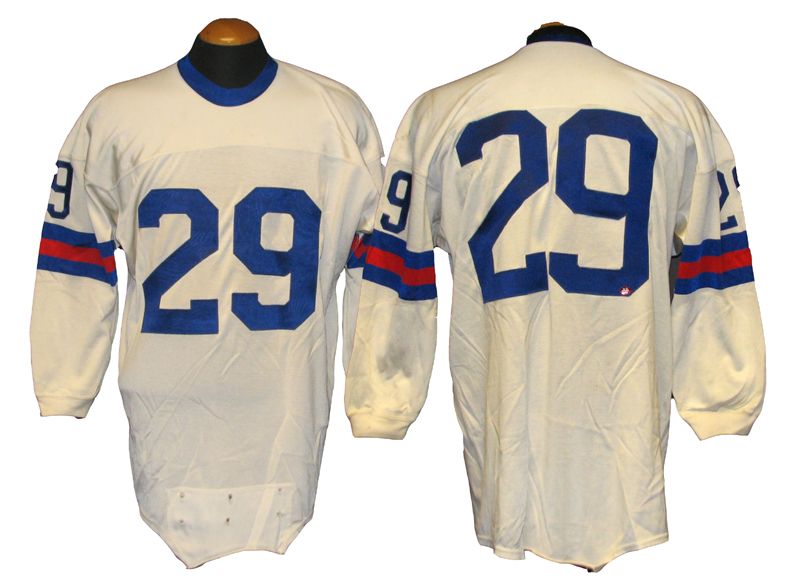