The UWFFL would like to officially extend an invitation to the GSL for their Gridiron Bowl I champion to participate in the 2021 UWFFL Champions League.  It will be a five week, 8 team competition that will take place from August 8 - September 5 (starting the week after Gridiron Bowl I).. The week after the Champions League crowns it's champion, the UWFFL Fall 2021 season will begin.

Inspired by the GSL's launch, I have decided to bring back the UWFFL as a simulation league.  My Atlanta Flying Fleet's participation in the GSL establishes that these leagues exist in the same universe.  I will be simulating the 2016-2020 seasons and as noted above, the UWFFL will be starting back later this year.

I will be making a separate forum below for further UWFFL stuff, separate from the GSL, and this will be my only mention of the UWFFL in this GSL section of the forum.  I am working on the UWFFL webpages and will launch them soon.

Further details will come later, but all GSL entrants are welcome to enter a team in the UWFFL.   My Atlanta team "withdrew" from the UWFFL after the 2020 season to compete in GSL in 2021, so teams can't do both at same time, but GSL owners are welcome to create new or other teams to be considered for the UWFFL in Fall 2021  (Or perhaps will be permitted to adopt existing abandoned teams).  Andrew & Curtis and anyone else who previously competed in the UWFFL from 2013-2016 will have a limited opportunity to submit a team or teams for 2017-2020 expansion in this year's simulation as we catch up, but all are welcome to compete in Fall 2021.  Deadlines and further info to follow in the UWFFL forum. 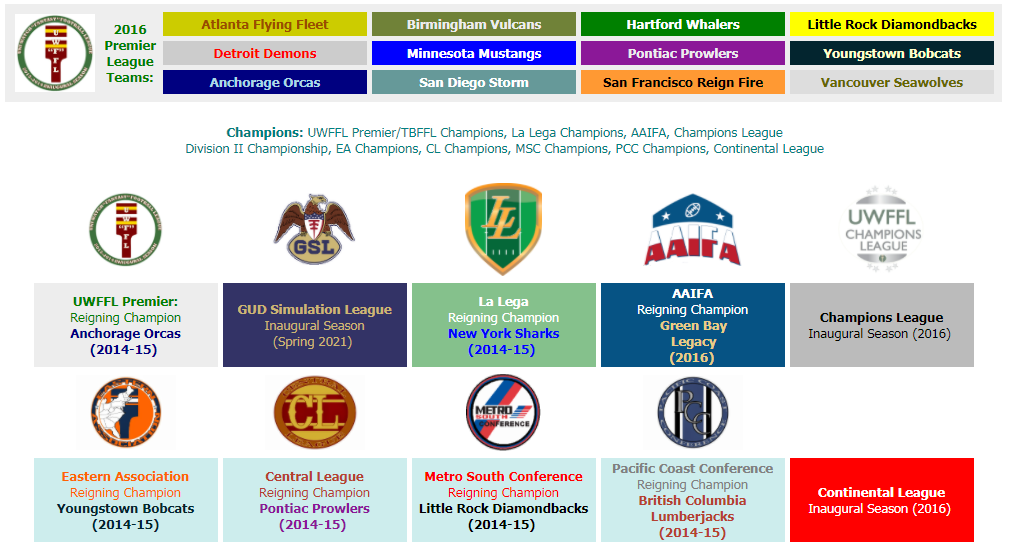 I`m in let me know what you need !